The ''Will of the People'' Mr. Will Crocker

Distinguished Citizen Award Presented to Will Crocker by Chandler Pernell at the Annual Meeting on January 26th, 2015.

Our second Distinguished Citizen Award will be given to someone who has served Johnston County and the Smithfield-Selma area for his entire life. The award also is sponsored by Woody’s Computing Service.

When my parents first moved back to Smithfield, they became this gentleman’s new (almost next door) neighbor. My parents moved into another house before I was born, so he was never my “next-door” neighbor, but as I grew up, I realized that he treats everyone as if they are his best friend.

You see him everywhere.  And he speaks to everybody he sees.  He is one of those kind gentlemen who they say “has never met a stranger.”

My first personal experience with this person came when I was in the elementary school AG program around 1987.  I was in science class, and our teacher was excited about an announcement she was about to make: that someone was here to donate a full skeleton to the program.  Man, I was excited.  What seven year old doesn’t get excited about a real-life skeleton?!

This man walked in the room, rolling a skeleton with him. I do not remember him saying anything, but he didn’t need to.   The excitement in the room from my classmates said it all.  I remember his face with a look of confidence and calmness.  Happy to see us kids happy.  The skeleton was named “Willy” and the man who brought it to my class was Will Crocker.

When I brought this memory up recently on Facebook, it was confirmed that this gentleman certainly had a long-lasting effect on people. It was amazing how quickly and how many responses I received to confirm my recollection of this event that touched us local school-kids almost thirty years ago.

In 1959, Will Crocker was studying at East Carolina University and working weekends at a car wash when he heard that the Town of Selma needed a clerk. He took that job, which started his career in public service. He was sworn in as Johnston’s clerk of court in 1977, after 10 years as assistant clerk.

If I had to describe him, I would call him a local diplomat with universal appeal.  When asked how he could be so respected by both political parties, he said, “It does not matter if you are democrat or republican, if you live in my county, then it is my job to take care of you.”

He treats everyone the same.  It’s such a strong conviction, I’ll say it again:  HE TREATS EVERYONE THE SAME. A simple-sounding but truly difficult task to carry out everyday.

Crocker attributes his many re-elections to a good staff. “The staff is what makes any individual look good,” he said. “Without a great staff, I would have never been here that long.”

He has just recently retired from his dedicated position of serving the people of Johnston County for 36 years as your Clerk-of-Court. I see him out and about at least once a week, and I will ask him, “How’s retirement?” He always pauses a second, like it’s the hardest question he has been asked, and every time he thinks hard about it and says, “I don’t know.” But he acknowledges that he would not be where he is today without God, his wife and of course his former staff members.

He is still everywhere and still caring about everyone.  When service is in your blood as strong as his, you don’t retire.  Not really.  You don’t stop loving people or caring for people. You just stop having to “go to work” every morning.  So I don’t think Will Crocker will every truly be retired.

This gentleman may not be “clocking in” anymore, but he will always be “the Will of the People.”

Let’s give a warm round of applause for this year’s deserving candidate of  Distinguished Citizen, Mr. Will Crocker. 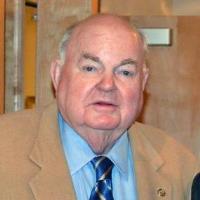