Johnston County, Smithfield and Selma are on solid ground but will need to remain vigilant about growth, education and economic development.

That was the message of county and local leaders at the 2015 State of Our Communities Luncheon, held at Sysco Food Services in Selma and hosted by the Smithfield-Selma Chamber of Commerce.

The brightest assessment came from County Commissioners Chairman Tony Braswell, who spoke about Johnston as a whole.

“I’m happy and excited to tell you that the state of the county is in a perfect place at a perfect time,” he said.

Johnston is on pace to be one of the fastest-growing counties in North Carolina, Braswell said. The county’s school system is already the second-fastest growing in the state, he said, and the commissioners have demonstrated their commitment to building schools. Johnston will continue to meet those needs, he said, and to support charter schools, which give parents more choice.

Braswell said he thinks Johnston has the most aggressive economic-development program in North Carolina, he said, and commissioners are 100 percent committed to adding jobs. By the end of the year, Braswell said he expects to have some major announcements of new industrial development.

Continuing to fund capital needs will be critical to the future, County Manager Rick Hester said. That includes schools, courts, other county buildings and infrastructure such as water and sewer.

Since 2000, Johnson has invested $522 million in its infrastructure, and most of that has been voter-approved debt, Hester said. In the next 15 years, Johnston will likely need to spend another $500 million on capital needs. To lower the cost of that debt, Hester said, the county is making progress toward its goal of obtaining a AAA bond rating.

Smithfield Mayor John Lampe kept his remarks the shortest of any speaker. The biggest issue facing the town by far, he said, is the comparatively poor performance of the schools in the Smithfield-Selma area.

“No town can survive if it’s dead last in the school system for 15 years in a row, which we are,” he said. “No one will come to the town.”

While Johnston’s population has exploded, Smithfield has shrunk, Lampe said. That will continue, he said, until the town sees its schools improve relative to the rest of the county.

A much more detailed presentation came from Paul Sabiston, who was town manager until the Smithfield Town Council voted 4-3 to fire him later that same day.

Sabiston broke down the Smithfield budget that took effect July 1, and he pointed out that it includes more than $3.5 million in capital spending in the general, electric and water and sewer funds. The budget did not raise taxes, will squirrel away $250,000 in savings and provides for merit-based raises of up to 2 percent for town employees.

Looking forward, Sabiston said, Smithfield has much to get excited about. The $6.2 million Smithfield Crossing’s project is essentially complete, electricity costs are going down, and the state has fast tracked the Booker Dairy Road Extension. Also, new businesses are coming to town, including a Buffalo Wild Wings, Starbucks and Chipotle.

Sabistion was glad to see stakeholders from Smithfield, Selma and the county come together, he said, because they are all in it together.

“Communities that can work together for economic development, job creation and other improvements are communities that actually survive and succeed,” he said.

Mayor Cheryl Oliver highlighted some of the success Selma has had in economic development. New businesses have opened along U.S. 301 and in Oak Tree Business Park, she said, and the demolition of the Regency Motel has opened up highly visible real estate along Interstate 95.

New in the town’s downtown business district, she said, are Platform Brand Design and Stitches Inc., which makes products out of Kevlar.

On the residential front, Oliver said sales of existing houses ticked up in the first half of 2015 compared to 2014. In the same period, prices rose about 12 percent per square foot, she said.

Oliver also touched on the challenges facing Selma. At the beginning of the year, the Town Council decided to focus on needs related to infrastructure, information technology, town personnel and benefits, town code and enforcement and economic development.

The negative perception of schools is another major issue for Selma, Oliver said. Research shows that more than 90 percent of homebuyers begin their search online, she said, and most real estate sites show that Selma schools have high ratios of students receiving free and reduced-price lunches.

“This often keeps prospective citizens and businesses from giving Selma serious consideration,” she said, “We are not afforded the opportunity to share the good news about our schools.”

In another matter of perception, Town Manager Jon Barlow said Selma has to fight the belief that it has a high crime rate. When you look at the data, he said, Selma has less crime than other North Carolina towns of its size. Criminal activity has trended down over the last five years, particularly in areas of property crime such as burglary, larceny and motor vehicle theft, he said. 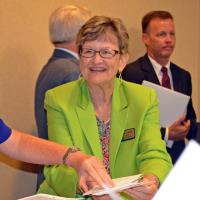