After 18 years of working in the airline industry, Margaret Raynor decided to retire in 2005. She tried several different jobs over the next six years, but she still wasn’t fully satisfied.

“One day my husband and I were sitting around talking, and he suggested I go back to school and pursue a career in the medical field,” Raynor of Smithfield recalled. “At first, I didn’t think that was a good idea, because of my age. I was thinking someone my age would have a hard time focusing, concentrating on school work, and just retaining the material.”

But after a few months of consideration, Raynor, now 47, enrolled at Johnston Community College in January 2011. It didn’t take long for her to excel in the classroom and become a leader at JCC. And that’s the primary reason why she’s JCC’s 2014 recipient of the Academic Excellence Award.

A dean’s list and Phi Theta Kappa student, she is also the treasurer of the Student Government Association, president of the National Society of Leadership and Success, and treasurer of the National Technical Honor Society. A recent recipient of the Governor’s Volunteer Service Award, Raynor will graduate in May with an associate’s degree in medical office administration.

“I’ve had the pleasure of teaching Margaret as well as interacting with her in other activities on campus,” said Paula Parrish, office administration instructor. “She has demonstrated hard work and determination through earning her degree as well as leading her fellow classmates.”

Raynor said her success at JCC wouldn’t have been possible without the unwavering support of her husband, Clifford, and adult son, Michael.

“I couldn’t have done it without them in my corner,” she said. “JCC has helped bring out the leader in me. “My experience here has taught me how to be more organized and more responsible. I’m learning something new every time I go to class.” 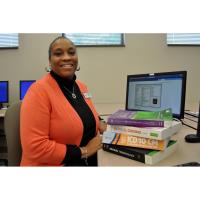