Presented by Crystal Roberts at the 45th Annual Meeting on January 26th, 2015

The Chamber Athena Award is presented each year to recognize the outstanding achievements of women in the Smithfield-Selma community. A national award, it is presented in over 300 communities and is sponsored locally by Corestaff Services. The Chamber would like to thank Corestaff for their continued sponsorship of this prestigious honor.

If one were to describe her as a book, this living legacy would be the leather-bound hardcover type with gilded pages that one places on their bookshelf within reach for reference and fulfillment. Hers is a book filled with such accomplishments and adventures as 30-plus year librarian, Social Studies and English teacher, Golden Pine Cone Girl Scout volunteer, four-term Town Council member and three-term and first African-American Mayor Pro tempore, an Honorable Heroine Award, and recipient of Radio One’s The Lamplighter Award.  Born in Selma of self-described humble beginnings, Jackie Jones Lacy’s life of service and career as a teacher and  librarian is representative of the books she read, catalogued and prepared for consumption: she’s a page-turner for sure.

Mrs. Lacy is the eldest of 10 siblings, offering her help and support to them after she graduated with her teaching degree—a degree she wanted and earned so that she could do her part to eradicate mistreatment of students, something she herself suffered. It has been her lifelong practice to make a difference.

A native of Selma, North Carolina, Mrs. Lacy earned her degree from North Carolina Central University, majoring in Social Studies with a minor in Library Science. Her professional career as an educator started 56 years ago in Mississippi, shortly after the murder of Emmett Till. She was drawn there due to that tragedy, much to her parents’ concern-- again wanting to make a difference. “It was an experience I shall never forget.” After meeting her husband Wayne and having their baby girl, the couple moved back to Mrs. Lacy’s hometown where she committed herself to being a walking testimony to being a small town girl making good.

Now Mayor Pro tempore and a four-term Town Councilwoman, she has distinguished herself immeasurably. “If I can come out of a four-room house and make it, you can too” is her mantra. And not only has she made it but she has gotten things done.

Mrs. Lacy was the force behind the re-naming of Railroad Street in Selma to Martin Luther King Way in Selma, a labor of love she undertook despite being challenged due to the thought that the area was not suitable to bear Dr. King’s name. But Mrs. Lacy pressed on because the street is located in an impoverished area, which was the lifeblood of Dr. Martin Luther King’s work. And she is accessible to young and old alike for mentoring, advice and guidance. When prompted to take the liberty of assessing her achievements, she said: “I think I am a waymaker. I think I am what Martin Luther King died for and what we marched for.”

Here’s to the energy, innovation, initiative and leadership that the Athena woman possesses. Here’s to Mrs. Jackie Lacy, elegant and fearless leader, community advocate, friend, wife, mother of one, and grandmother of three. Ladies and Gentlemen, please join me in saluting our Athena Award recipient, Mrs. Jackie Lacy. 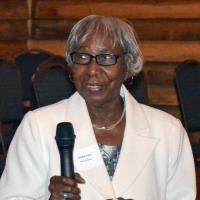