An award-winning Johnston County brewing company has quickly developed a statewide presence by partnering with a North Carolina beer and wine distributor.

Larry and Cheryl Lane started Double Barley Brewing near Wilson’s Mills less than two years ago. In that short time, Double Barley has won a gold medal in the N.C. Brewers Cup for its Thrilla In Vanilla Porter. In addition, beer lovers can find Double Barley products on tap in more than 300 restaurants and bars across the state.

Double Barley has just four full-time employees, so how did all of this product exposure happen?

“We knew our beer was good,” said Cheryl Lane. “It was the delivery we couldn’t handle ourselves.”

So the brewery turned to Raleigh-based Mutual Distributing, which handles the delivery and sales of Double Barley products. Soon after the brewery opened, Double Barley entered into a partnership with Mutual. From its seven N.C. warehouses and with its 600 employees statewide, Mutual distributes a wide range of beer and wine to more than 15,000 grocery and convenience stores, restaurants and bars.

“We went from having one sales person to have a team of 100 salespersons,” Lane said. “I just don’t understand how – or why – other brewers would want to handle it themselves.”

Bill Leone is the sales manager for Mutual’s Raleigh operation. Leone praised Double Barley and the Lanes for what he calls a great partnership.

“Double Barley makes phenomenal beer, and the owners have been very supportive of what we are doing,” Leone said. “It’s a great partnership.”

It’s a coincidence, but the partnership has a strong Johnston County connection as Mutual’s owners reside in Smithfield and Clayton. When Mutual first began working with Double Barley, DB beers were available only in the Triangle market.

“We wanted to make sure we could keep up with production,” Lane said. “Mutual expanded us into the Greensboro market, and then we moved into Charlotte and Asheville incrementally.”

“This partnership is a vivid example of how a brewer and distributor work together,” said Tim Kent, executive director of the N.C. Beer & Wine Wholesalers Association. “The distributor and its sales staff helps the brewer build its brand to a larger audience while handling the logistics of delivery.”

Michael Hayek is the statewide beer division manager for Mutual. He said he was impressed by the high quality of Double Barley’s beers and their appeal to a statewide customer base.

“Double Barley’s beers are extremely drinkable,” he said. “People love these beers, and they love the stories that Larry and Cheryl Lane tell about their beers. Craft beer has a strong romantic element, much like wine, and people strongly connect with Double Barley and their stories.”

The Lanes are North Carolina natives who met in engineering school at N.C. State University. They have been married for 21 years and have three teenage sons. The Double Barley story began when Cheryl gave Larry a homebrew kit for his 40th birthday.

After five years of brewing in the garage and driveway while fine-tuning recipes, the Lanes took the big step of opening a brewery, taproom and beer garden alongside U.S. 70 in Johnston County.

Cheryl is actively involved in Double Barley’s marketing; she’s a high-energy presence at beer festivals and “tap takeovers” at restaurants and bars across the state.

“It was hard starting up this business, but it’s still difficult to keep it going,” she said. “If we didn’t have the sales that Mutual is bringing in for us, we might not still be here.”

Although Larry still works full time as a pharmaceutical engineer, he took the lead in the design and construction of the brewery, which previously was a warehouse for a moving company. The 20-barrel brewing system gives Double Barley ample room to increase its volume production. In 2014, Double Barley produced 1,100 barrels of beer. This year, the Lanes expect to produce at least 2,200 barrels. One barrel is equivalent to 31 gallons of beer

With the help of Mutual Distributing, Double Barley will soon be selling four-packs of 12-ounce bottles in select grocery stores and bottle shops. In the not-so-distant future, the Lanes hope they will be able to produce 12-ounce bottles in six-packs and ultimately become a regional brewer with a presence throughout the Mid-Atlantic region.

Double Barley Brewing, however, wouldn’t exist without the financial help and support of the Lanes’ friends and family. About 150 of those family friends either own stock in the company or took part in a Kickstarter fundraising effort. For Cheryl Lane, it’s all about giving something back to the Johnston County community.

“We are currently working on a special 30-barrel batch for the Beer Army Foundation,” she said. “We will be able to raise $20,000 for a scholarship fund to assist college-bound students.” 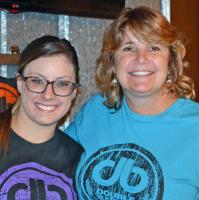