US 70 could be designated a future interstate highway

North Carolina’s delegation in Washington has introduced bipartisan legislation that would pave the way for U.S. 70 to become an interstate highway in Johnston County.

While the bill’s name focuses on its military significance, an upgraded connection from Raleigh to the beach would also have obvious benefits for tourism and the movement of freight.

U.S. 70 runs through Johnston, and its improvement would make the area much more attractive to businesses and industries, said Chris Johnson, head of the county’s economic-development office.

A direct connection to the state capital and the Morehead City port could place Johnston “in the epicenter of potential growth,” Johnson said. That would give a big boost to towns along the route, including Smithfield, Selma, Princeton, Pine Level and Wilson Mills, he said.

“Just from a marketing tool alone, it’s huge,” Johnston said. “To say that you’ve got property on an interstate would be tremendous.”

In prepared statements on the bill, North Carolina’s lawmakers in Washington touted its potential benefits to both defense and the economy.

Sen. Thom Tillis, who introduced the bill in the Senate, said continued investments in transportation would help North Carolina remain a bright spot in a sluggish national economy. The act “is a true bipartisan effort to support North Carolina’s military installations and complement the state’s 25-year transportation improvement plan,” Tillis said. That “in turn will generate economic development, provide a boost for local communities and create good-paying jobs.”

As the bill’s co-sponsor, Sen. Richard Burr said it would allow North Carolina to refurbish and expand its highway system. “Improvements to this infrastructure is critically important to local communities and will make this high transit corridor safer, faster and more modern, ensuring that North Carolina’s economy continues to be one of the most vibrant in the country,” he said.

Reaching across the aisle to join North Carolina’s two Republican senators, Democratic Rep. G.K. Butterfield sponsored companion legislation in the House of Representatives. He called the bill vital and said it would stimulate job growth throughout the eastern part of the state.

“Improving transportation in Eastern North Carolina is vital to strengthening our state’s economy, improving military readiness and commerce, and reducing traffic congestion,” Butterfield said. The act “would connect cities and military bases throughout Eastern North Carolina with a major port, the state capital and the Eastern Seaboard.” 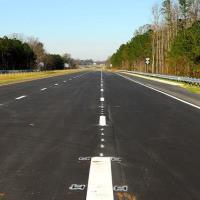