The News and Observer
jdjackson@newsobserver.com

When picturing the Johnston County of the future, its highways and byways are a good place to start.

Earlier this month, The Clayton Center played host to the kickoff for a study that will analyze transportation demands from Garner to Interstate 95 in Smithfield. With the area poised for growth, thanks in part to insulin maker Novo Nordisk, the study could get Johnston out in front of what could otherwise become a countywide traffic jam.

The Capital Area Metropolitan Planning Organization has already completed its Southwest Study, targeting Apex and Cary, and its Northeast Study, covering Wake Forest. With its Southeast Study, CAMPO is turning its attention to Johnston County and its nearest Wake County neighbor, Garner.

At the kickoff on Oct. 8, The Clayton Center’s council chambers became a transportation dream board for area residents, who, through of a series of interactive stations, pointed out where they live, work and spend their free time. They then listed their transportation priorities, picking from options that included “travel safety,” “economic vitality” and “traffic flow.”

CAMPO transportation planner Alex Rickard said study organizers will use the responses to understand traffic flow in and around Johnston County and to learn what matters most to county drivers.

A quick glance at the responses on Oct. 8 showed economic vitality atop the priority board.

“This is the info-gathering portion of the study,” Rickard said. “We’ll analyze to help determine what trends exist in land use and how citizens want to grow.”

Rickard said the study’s results will help CAMPO and the state’s Department of Transportation plan projects for years to come. “It will help influence how funding is allocated down to the intersection level,” he said.

The consulting firm Kimley-Horn is conducting the study for CAMPO, and the firm’s Allison Fluitt is the project manager. She said the study’s seeking feedback on issues large and small – from which lights take the longest to turn green to how the county’s road system could function better.

The timing of the study said, Fluitt said, could prove huge for Johnston County.

“Transportation is directly tied to economic vitality and land-use development,” she said. “This is a really great place for the study to occur. People can look out 10 years, 20 years in the future and grow the way they want to grow.”

For years, Interstate 95 fueled growth in Johnston, building up towns on the strength of manufacturing and, later, retail, especially Carolina Premium Outlets in Smithfield. More recently, the pull has been to the west, with proximity to Raleigh and a burgeoning pharmaceutical industry growing the county west of I-95.

Rick Childrey, president of the Greater Smithfield-Selma Chamber of Commerce, made the drive from Smithfield to Clayton for the traffic symposium and had jobs on his mind. Atop his list of priorities was economic vitality, followed by “economic sustainability.”

“First and foremost, we need jobs, good-paying jobs,” Childrey said. “But Smithfield and Selma, over the years, have lost manufacturing jobs. For those living in the county, there’s a lot going on right now, but we want to do this thing sustainably.”

For those who didn’t attend the symposium, the study is still accepting responses online. A questionnaire is available at www.southeastareastudy.com. Fluitt said CAMPO would hold a second public-input session in the spring, with the date and place to be set later. 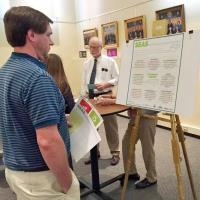