The Fourth of July in Smithfield in 1836

The anniversary of our national independence was celebrated in Smithfield with unusual spirit and eclat. The day was ushered in by thirteen rounds of cannon. At 10 o'clock the citizens assembled at the Academy, where a numerous procession was formed, and paraded through the streets of our beautiful village by Capt. MacPherson, marshall of the day. On arriving at the Court House the reader and orator of the day were conducted in by the committee of arrangements. Dr. C. M. Vaiden there read the Declaration of Independence, preceded by a few appropriate and patriotic remarks, after which, an oration was delivered by B. J. Borden, Esq., which successfully refuted the frequent assertion that nothing new can be said on such an occasion. Mr. Borden's address evinced much research and reflection, and his style of delivery can be surpassed by one of his age and experience. The approving smiles of the ladies, who were present, and the immense cheering of the whole audience afforded sufficient evidence of the estimation in which his address was held.

At 1 o'clock, a large number of gentlemen without distinction of party, partook of an excellent dinner, prepared by Captain Guy, in his best style. When the cloth was removed, Col. Jno. MacLeod was requested to act as president of the day, and Dr. A. F. Telfair and C. Christopher, Esq. as vice presidents. The following toasts were then drank with the greatest harmony and good feeling.

1. The day we celebrate - The dawn of liberty after the darkness of tyranny.
2. Our Country
"Lives there a man with soul so dead,
Who never to  himself hath said,
This is my own, my native land."
3. The patriots of the revolution- We will cease to remember them when we cease to exist.
4. General George Washington - Great and good. (Drank standing and in silence.)
5. The two new states, Michigan and Arkansas - welcome to seats at our communion table.
6. Our gallant Navy and Army - The wooden walls of the one, and the bristling bayonets of the other, our strongest fortifications.
7. Internal improvements in North Carolina - Rip Van Winkle is rubbing his eyes.
8. The heroes of Withlacoochee - In the language of their enemies, "while grass grows and water runs" their memories will be cherished by their countrymen.
9. The constitution of the United States - a model for new republics, a beacon to guide to liberty.
10. Our peculiar domestic institutions - Guarded by a constitutional thistle, Noli me tangere (Touch me not.
11. The President of the United States
12. The American Fair. "The sweetest hours that e'er we spent, Were spent among the lasses, O!"

By the President of the day. Old North Carolina, dressed in a new garment, with a portion of her rights in her pocket, and wisdom in her head, she may yet be what she long ago ought ot have been, one of the first States in the Union.

By C. Christophers. May political differences never mar the festivities of our national anniversary.

Dr. Dr. Telfair. The orator of the day - We pledge him in a bumper for the pleasure he has given us.

By the Orator of the Day. Wm. Hooper, a patriot of '76: His memory will be revered as long as beats the pulse of a proud Carolinian.

By Dr. Vaiden. Thomas Jefferson - The Aristides of America. The inspirations of genius, patriotism, and philanthropy illuminated his brilliant path.

By H. W. Husted. Old Mecklenburg - The plumes of this proud bird of the mountain must never be torn. Honor to whom honor is due.

By T. Reavis. North Carolina - Love for her institutions, honor for her independence, but tears for her want of energy.

By J. S. Powell. Our National Flag - It's stars for the face of our friends; its stripes for the back of our foes.

By Wm. H. Morning. May the skins of tyrants and usurpers be tan'd into leather and stretched over drum heads to beat for liberty.

By Thomas Powers. The spirit of ,76 - May it arouse from its slumbers, and call up the spirit of our entombed constitution.

By T. Reavis. Knife and fork exercise rather better than fighting the Seminoles. So thought General Scott.

By Dr. Ennis. The Hon. John Tyler - The purity of his private and public life renders him impervious to the shafts of calumny.

By Wm. H. M'Cullers, Wm. Gaston. HIs character is as spotless as the ermine he would protect. 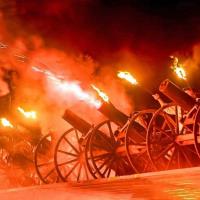