The Spartan Football Team was recently featured on a national level when it appeared on the cover of the National Football Foundation’s website “Football Matters.”

The team was featured for its selfless dedication to come together off the field and donate their Saturday morning to mixing, weighing, packaging, and sealing 10,000 meals in two hours with the Raleigh-based organization Stop Hunger Now.

Showcasing football teams from around the country, FootballMatters.org brings attention to football teams who dedicate their efforts off the field volunteering their time to help better those in their community as well as around the world.

The partnership between the Spartan Football Team and  Stop Hunger Now captivated NFF’s Contributing Writer Drew Borsellino’s attention and thought the story would be a perfect fit for its “Special Teams” section. The section features local high school and/or college football teams who give back in a variety of community service projects.

“I try to take local news stories about high school and college teams and give them credit at the national level,” said Borsellino. “This is how I found Smithfield-Selma's story and wanted to share it with a larger audience.”

While the community service project was several months back, Smithfield-Selma High Football Coach Wes Hill felt a sense of pride, all over again, in his players for being recognized on such a grand scale for their selfless acts to help others.

“I think it is a testimony to the kids we have here at SSS,” said Hill. “Most people in our county do not know the quality of young people we get to coach and teach. I am proud of our kids and am looking forward to future opportunities with them.”

With a new school year upon us, Coach Hill looks forward to building character into his team this year. Working with them on and off the field, Hill wants his players to be compassionate human beings in a selfish world and strongly believes community service projects will build positive role models for the community.

“This is an important characteristic both on and off the grass,” said Hill. “My mentor use to say, ‘It isn’t about me, it's about we.’” He went on to say, “That no matter how bad we think we have it, you don't have to look very far to find someone who has it worse and needs our help.”

Drew Borsellino’s article featuring SSS can be found at: http://footballmatters.org/stories/smithfield-selma-teams-up-with-stop-hunger-now 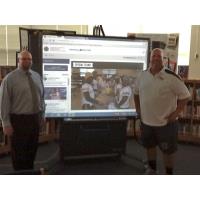