Smithfield is overhauling its development rules, and the committee in charge of those changes met last month to go over the first few sections of the 443-page document.

One of the most complex parts of the rules is what authorities make the decisions and what powers they have and when. The town’s planning board, board of adjustment and town council all have the power to make rulings when it comes to how people use land in town.

Special-use permits allow people to use a piece of land for a specific purpose under particular conditions, and that use isn’t always typical. Requests for a special-use permit go first to the town’s planning department and then to one of the boards that can say yes or no.

Rezoning requests and other planning matters often require hearings much like court proceedings with witnesses sworn in, evidence presented and rules about who can speak.

With so many rules governing procedures, details such as which board tackles which issues and how many votes it takes to approve or deny a land-use request, the process can be confusing. It’s up to the committee appointed by the council to make recommendations on how, or if, to simplify those processes.

Zach Carscoddon, a Smithfield resident who attended the June 28 committee meeting, wanted to know what the process would be for special-use permits. Committee members essentially said that’s what they’re trying to determine.

The town last updated its Unified Development Ordinance eight years ago, and the book-length document is in severe need of editing, according to consultant Dale Holland.

Many of the changes are necessary because of decisions by the state legislature in Raleigh.

“If Smithfield and other towns want to stay current with development rules, they have to pay attention (to the N.C. General Assembly and judicial changes),” Holland said.

State-level changes are the law of the land, no matter what Smithfield does or doesn’t do, Holland said. “State law is law,” he said.

That means towns need to keep pace, Holland said. “Not updating your local rules could just be confusing to people reading them to try to figure out what’s going on,” he said.

Smithfield’s planning department is in charge of keeping up with changes in state, thought lately it had been overwhelmed, Holland said. Senior planner Mark Helmer suggested the town could look at updates quarterly after it approves its new set of rules.

“It’s going to be a root-canal process,” Holland said.

Not only is Smithfield aiming to simplify its rules and make sure they match up with state law, it also plans to modernize its policies on development. One of those policies governs sidewalks.

Some communities require just about all developments in town to build sidewalks. Others don’t. But the list of communities not requiring sidewalks in their development rules is dwindling, Holland said.

“It’s going to be up to you at some point to decide if you want to prioritize pedestrian accessibility,” Holland said.

Not many changes are likely in those sections, Holland said. More substantive edits will likely begin in Article 5, which governs the development-review process.

Councilman Emery Ashley warned his fellow committee members not to “get more bogged down than we have to” given the length of the UDO. The committee is looking to reduce 27 articles, or chapters, to 11.

“This can get out of hand, and we could be here all night,” Ashley said.

The UDO committee meets on the fourth Tuesday of most months at 5:30 p.m. at Town Hall. All of the meetings are open to the public. The next meeting is Wednesday, July 27. For more information on the UDO-update process, go to www.plansmithfield.net. 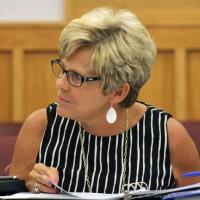