Most of them are 18 and they’ve already signed a blank check for their country.

They’re future soldiers, already enlisted in the Army, and many of them head to basic training in the next few weeks.

In Smithfield on Saturday, 40 of them from recruiting centers all over Eastern North Carolina – a company including Smithfield, Goldsboro, Rocky Mount, Elizabeth City and Greenville known collectively as the Greenville Bloodhounds – competed in the Bloodhound Olympics.

Smithfield defended its title Saturday with a win, and its team kept the trophy and will host the next event.

“It’s about moving as a team,” said Capt. Charles Thomson, commander of the five Eastern North Carolina centers competing. “It’s knowing everyone has your back and is helping each other succeed.”

The competition included a litter run, where teams of 10 ran with 45-pound jugs of water and a stretcher for about a mile and a half, then loaded one of their teammates into the stretcher and ran all the way back. While running, the teams had to remember signs posted along the way and race to complete a quiz when they reached the finish line.

Teams ended the day with a water balloon fight, awards and lunch.

“This type of event helps them remain motivated and committed,” Thomson said. “It helps them be proud to be a future soldier and if we can do that, we’ve done a good job.”

Altheia Balageo, 18, just graduated from Princeton High School, where she excelled academically and played four sports. The Army came looking for her and now she’s enlisted in the Army Reserves and will be headed to basic training on Sept. 6.

Balageo plans to pursue medical school, she said. Her military occupational specialty, or her job in the reserves, is health care specialist – a combat medic, she said.

“I’m kind of thinking about going into residency with the Army rather than other, more common or traditional programs,” she said. “With the Army there’s a lot more hands-on training and in the service, I think there’s a need for more people out there.”

For Balageo, the Bloodhound Olympics litter run was especially meaningful.

“We’re taught not to leave anyone behind and sometimes you have someone too hurt to walk, so you have to get them out of there,” Balageo said. “It’s all part of the training we all have to go through.”

Balageo and her team hustled along the Buffalo Creek Greenway in Smithfield but finished the race second, just behind the Greenville team. Their edge was fewer penalties and the quiz.

Twins Michael and Patrick Connor, 18, are seniors this year at Cleveland High School. They’ve been in ROTC throughout school and have already enlisted in the Army. They head to basic training on June 20.

Michael will be a 19 Delta Cavalry Scout, a reconnaissance specialist. Patrick will be an 11X Infantryman, the main land combat force in the Army.

The brothers said they grew up knowing they wanted to be soldiers, and have a family history of service with a grandfather who was in the Navy, two soldier cousins and a Marine cousin. They said they enlisted to help people.

“I love the idea of helping people who can’t help themselves and defending this country from anyone who opposes it or attacks it,” Michael said.

“I like making people feel better and anything I can do to help them,” Patrick said. “So if we were some place that needs help, I’d want to do that. Humanitarian efforts are a big part of what the Army does today.”

Also at the event was Julie Radford, a recruit who worked hard to lose 44 pounds to be eligible to enlist. She’s back from basic training and headed to her duty station in Georgia soon, but for the past few weeks she’s been working with her recruiting center and helping other future soldiers. 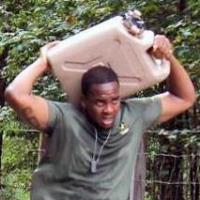