Sitting Smithfield Councilman Andy Moore will move a couple seats over to his new position as mayor. Moore took the office by a wide margin on Tuesday over political newcomer Jim Snyder.

“I’m happy and humbled to finish in the top three,” Ashley said. “I think we’ve done some good things on the council, and I have all the confidence in the world that the council will work together as one.”

Some degree of change was a certainty in Smithfield, with the town guaranteed a new mayor and at least one new councilman. Current Smithfield Mayor John Lampe announced in May that he would not seek a second term, citing the demands of his building-supply business, and Moore vacated his council seat in his bid for mayor.

Smithfield voters used the polls to express some ambivalence over the town council. Ashley was an incumbent and the leading vote-getter, suggesting some support for the current council’s work, but that support was not enough to secure Williams another term.

“I’m sorry for my friend Charles Williams; he’s done some good work for the town,” Ashley said. “But that’s the democratic process.”

Dunn easily secured a seat on the council, but Rabil replaced Williams by just 29 votes.

“I’m excited about the win,” Rabil said. “I’m ready to be on the council and show the town we can work together as seven council members and make Smithfield better.

“I worked hard, and I think the win showed that the citizens are ready for some fresh ideas on the council.”

One of the new council’s first orders of business will be hiring a new town manager, after former manager Paul Sabiston’s abrupt firing in August. A further cut in electricity rate is also expected.

Ashley said the intent was always to wait until after the election to begin considering a new town manager. He expects the council to hire a new manager next spring.

“The new guys are going to get thrown into the fire with this application process,” Ashley said, recalling his own experience when he was first elected in 2011 and immediately tasked with hiring Sabiston.

Selma voters elected to keep Cheryl Oliver as the town’s mayor by a two-to-one margin over sitting Councilman William Overby. In the race for two open council seats, newcomer Mark Petersen received the most votes, followed by incumbent Tommy Holmes.

Oliver, who won her third two-year term Tuesday night, sees the election as a referendum on the direction of the town.

“I’m sincerely honored by the strong show of support and honored the residents of Selma would allow me to continue to serve the town,” Oliver said. “Selma is trending in the right direction. Trending doesn’t mean we’ve arrived, but we’re down the right path.”

The town knew it would have at least one new council member after Councilman Eric Sellers announced he would not seek another term. Incumbent Holmes kept his seat by 66 votes over Lillie “Shorty” Langston, who was followed in voting by Eric Jackson, Timmy Strickland, Anthony Baxley Jr. and Byron Wickline. Both Strickland and Baxley withdrew from the race but remained on the ballot.

Petersen, a retired Marine and current physics teacher at Smithfield-Selma High School, might be the surprise of the night. In seeking his first public office, he took more than a third of the vote in a seven-candidate race.

“Not having participated in the election process, it was a bit of a surprise,” Petersen said. “I was at the polls yesterday, watching voters trickle in, wondering what it meant if there was low turnout or high turnout, what effect the rain might have, but not really knowing the answer to any of it.”

Petersen said he’s already getting emails and instructions on the position, but he pledged an open mind on town business.

“I’m going to lean on a lot of people for advice and will get in there and listen to all sides and look at all the data to make informed decisions,” Petersen said.

Lifelong Selma resident Vertes Richardson worries the town’s better days are behind it, noting the town is far less active than it once was.

“It’s more of a village today,” Richardson said. “It’s just storefronts but no stores. There’s no five and dime.”

Husband and wife voters Ruthie and Wayne Strickland seemed to agree with Richardson, calling Selma’s downtown “stagnant and slow.” Without revealing their votes, they said they hoped to see a more open town council next year.

“We want someone you can get in touch with,” Ruthie said. “Someone who’s transparent, with nothing to hide.” 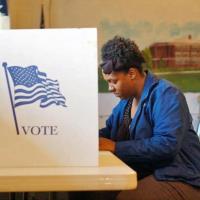