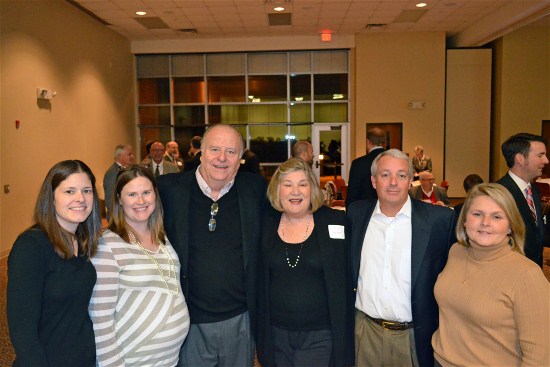 The Jimmy Creech Small Business Person of the Year Award is given in memory of the 1976 President of the Chamber. Mr. Creech operated Creech’s Pharmacy in downtown Smithfield for some 40 years and was the epitome of a business and community leader. The award is given to people who emulate this fine man. It is sponsored annually by Stancil Oil Company.

This year The Chamber Awards Committee has decided to recognize two business people who own and operate Mutual Builders in Smithfield, Millard Stallings and Robbie Parker.

These two gentlemen, who have been in business together since 2003, not only are successful contractors for affordable multi-family housing, but have helped revitalize downtown Smithfield. Their beautiful new building at the corner of Bridge and Fourth Streets is a testament to their business success. And their purchase and operation of Bistro on Third is a reflection of their desire to see a good quality of life for the area through an attractive upscale restaurant.

Millard Stalllings was born and raised in Smithfield. He attended High Point University where he met Patti Wimbish in religion class. They were married in 1968 and moved to Dobson, North Carolina where they both taught school. The couple relocated to Mount Airy in the 1970s where both of their daughters, Betsy and Amy, were born. While in Mount Airy, Millard changed careers, purchasing Appalachian Building Supply and moving it to Smithfield in 1984. After several years in the building supply business, Millard sold the company and began working for Regency Development and Construction Company in Raleigh. It was there that he got to know his future business partner, Robbie Parker, and stayed there until the two started Mutual Builders in 2003.

Millard undertook several large restoration projects, including one in Sanford and one in Smithfield. In a $1.3 million project, he restored the former Carolina Hotel into a 24-unit apartment complex for senior adults. His Smithfield project was very similar, turning the once Austin Department Store and Heilig Meyers Furniture Store on South Third Street into Austin Manor, also for adult senior housing.

Robbie Parker was born in Clinton and graduated from Clinton High School and later, East Carolina University with a degree in economics and finance. He had always been interested in construction as his parents were involved in the building and management of apartment complexes in Clinton. After college he also worked with Regency Development in Raleigh. Robbie’s family includes his wife Rhonda and two sons, Jackson and Spencer.

Becoming tired of the daily commute, Millard and Robbie started Mutual Builders in 2003 and relocated their office to a small building on South Third Street in Smithfield. In 2010, the company took on two major projects – moving into the new office on Fourth Street and opening The Bistro on Third. In a down economy and with the normal difficulties in operating a locally-owned upscale restaurant, Millard and Robbie have not only beaten the odds, but also given much back their community. And their construction company continues to be active in building affordable multi-family housing - new construction and rehab - throughout the Southeastern United States.

Millard is active at Centenary United Methodist Church where he is a member of the Board of Trustees. Robbie has been on Advisory Boards at Smithfield Middle School and Neuse Charter School. He is also on the Board of Smithfield Parks and Recreation, a volunteer for Boy Scout Troop 77 and a youth football and basketball coach.

Getting back to Bistro on Third – Millard and Robbie have committed themselves to not only operating a top-notch restaurant but also helping in the revitalization of downtown Smithfield. They contribute significantly to downtown activities, such as the Ham & Yam Festival and the Third on Third Concert Series. And they host numerous community events and receptions.

And the restaurant is getting great reviews on websites such as Yelp and TripAdvisor.com. Here is one example:

“I eat at a lot of great restaurants and I consider the Bistro on Third to be at the top of my list. Every time I visit I get that feeling of being at home. The atmosphere is so relaxing and welcoming. The simple elegance of the restaurant and the friendly enthusiastic wait staff prepares me for the true fine dining experience. Whether I choose the clam chowder or the baked spaghetti or any of the many wonderful dishes I have tried, I know my meal is going to be satisfying. And the Key Lime Pie!!! Oh my....that graham cracker crust is unbelievable! The food, the service, and the price are the reasons I continually visit this establishment. For a truly great dining experience you can't beat Bistro on Third!”

Robbie and Millard, thank you for your support of downtown Smithfield and the Smithfield-Selma area. Please come forward to accept the Jimmy Creech Small Business Person of the Year Award.