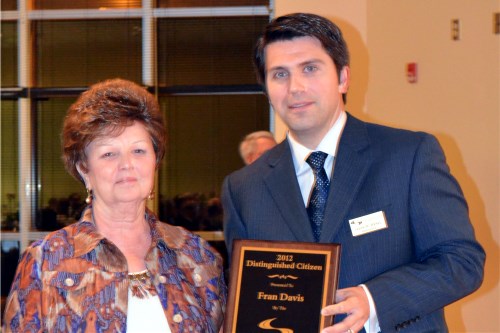 The Smithfield-Selma Chamber of Commerce recently presented a Distinguished Citizen Award to Fran Davis. The award is sponsored by Woody’s Computing Service, and we appreciate that support.

For the past 25 years, Fran has been a dedicated servant for the Town of Selma. She recently retired from her position as Town Clerk and Human Resources Director, which basically means she kept the “wheels rolling” for the town government.

Fran Davis is a graduate of Princeton High School. She attended Johnston Technical College and completed work at the University of North Carolina School of Government. She is a certified municipal clerk.

Fran worked for five years at the Sylvania plant in Smithfield and another five years for the Town of Clayton before being hired by the Town of Selma on October 21, 1987. She retired on December 31, 2012, having served seven mayors, fifteen Council members, and six town managers during her tenure.

According to town officials, “Ms. Davis has proven herself to be a dedicated and efficient public servant who has gained the admiration and respect of her fellow employees and the residents of Selma. She has constantly exhibited in her position professionalism, a strong work ethic, integrity, and sound judgment.” In a resolution adopted by the Town Council, the Town of Selma “expresses to Ms. Davis, on behalf of themselves, the Town’s employees, and the residents of the Town of Selma, their deep appreciation and gratitude for the dedicated service rendered by her to the town.”

But it’s not just her career that make’s Fran so deserving of this honor. She has been a tremendous volunteer. Fran is a member of Sardis Baptist Church, located on Brogden Road. She has participated in several mission trips, including Alaska, Nicaragua, and Gulf Port, Mississippi after Hurricane Katrina. She started an after school program at Sardis and served as Director for many years. Fran is a teacher of the college age Sunday School class at her church, is a member of WMU, the Women’s Missionary Union, sings in the choir, and helps with Vacation Bible School and Fall Festival every year.

In addition to her church activities, Fran teaches once a month at the Hester Home, a facility for mentally disabled full time residents. She has also been a great supporter of the Boys and Girls Clubs of Johnston County and has served as its treasurer since 2006.

Fran loves community events. You can always see her at Railroad Days or the Selma Car Classic in a concession stand or manning a booth, not as a town employee, but as a dedicated servant to her church or other worthy cause.

Many accolades have come Fran’s way since she announced her retirement last fall. Former Selma Town Manager Jim Caldwell, who hired Ms. Davis, said, “hiring her was an excellent move.”

Former Mayor Charles Hester praised her work calling her a tireless worker for the town and a person who has carried a vision for Selma. “She’s a great Christian lady,” he said.

Town Attorney Chip Hewett said Davis’ job is where the “rubber meets the road in Selma.” And Town Manager Richard Douglas said she’s been a trusted adviser and friend to him.

Chamber President Rick Childrey says that “Fran was always a delight to work with. She knows the importance of both towns working together in bringing jobs and a good quality of life to our area.”

Finally, Selma Mayor Cheryl Oliver summed up what so many citizens feel about Fran, “We recently celebrated Fran's 25 years of service to the Town of Selma.  The quantity of years certainly deserved recognition but it is even more important to note that they were years of quality service.  Fran's strong work ethic led her to give her very best every day to our citizens, employees, and outside organizations.”

Fran is a loyal, stable, trustworthy and very dependable community servant. She is certainly deserves being named a Distinguished Citizen.