His friends now call him “New Dave,” but when he started his hike of the Appalachian Trail, he was just David Johnson, a Smithfield businessman with a wife, grown children and a rescue dog named Maizy.

But “New Dave” fits because he was ready for something new.

“I got involved in my family business at 17, and for 35 years, I had done the same thing,” said Johnson, whose family started Interstate Glass.He never even made it to college. “I was afraid that I would die at my desk identified with one thing,” Johnson said.

Johnson was also the Chamber's 2005 Board Chair.

So when the opportunity presented itself, he made his peace at home and set off for the wilderness. At 53, Johnson was physically fit; he biked and competed in triathlons. And he had done some weekend hiking, in part to try out equipment. But otherwise, Johnson had no experience before undertaking such a monumental task.

“This was something I could do that was selfish and, to some extent, irresponsible,” he said, laughing.

Every hiker has his or her reason for tackling the Appalachian Trail. For his part, Johnson was at a crossroads in his life: His children were grown, and he had sold his business.

“In a lot of ways, I was unsure where the next chapter in my life would go,” he said.

So on March 16, Johnson started that next chapter at the foot of Springer Mountain in Georgia. His journey ended Aug. 8 in Baxter State Park in Maine. The final numbers: 2,190 miles across 14 states in 147 days, plus five pairs of hiking boots and one can of unused bear spray.

About 6,000 people hike at least part of the trail each year, Johnson said. He started earlier than most – March instead of April – giving him easier access to shelters, campsites and water.

That’s not to say he was alone. Other hikers of varying ages joined him along the way, all with a trail name – Mom, Orbit, River, Nova, Big Fudge, Oats, Moose, Veggie Stew and Kahoodin among them. Johnson’s trail name was New Dave.

He said he spent much of his time with the mother-daughter hiking team of Mom and Orbit, who helped him through the tough times.

Other than his wife, Johnson said, he missed his dog, Maizy.


Hikers like to travel light, but the necessities add up. Johnson had a backpack, tent, sleeping bag, a water filter, clothing, hiking poles and a first aid kit. He resupplied in towns along the way, with his wife, Christine, sending what he needed to previously determined addresses.

Johnson said he wished he had packed a warmer sleeping bag; those nights in March were cold.

On the trail, Johnson said he was partial to Snickers bars and Oreo cookies. In the towns where he stopped, he treated himself to pancakes with real maple syrup, cheeseburgers and ice cream.

“You’ve got to keep your calories up,” Johnson said, laughing.

The one thing he carried but never needed was the bear repellent, though his wife insisted he take it with him.

Johnson said he spent no more than $2,000 on gear for this hike. He spent maybe another $3,000 on resupplies, restaurants, hotels and hostels. Put another way, he lived on about $34 a day, room and board.

He’d stay at hostels to shower and wash his clothes. There he’d talk with other hikers, trading tips and “trail gossip.”

“It’s a very close-knit community,” Johnson said. “It’s a good community of people looking out for each other.”

But it was the Smithfield community he carried with him that made the most difference, Johnson said. He had a cell phone but often had no signal and no idea when he would be able to charge the battery. So he and a friend back home, Chris Johnson, came up with a communications routine. Johnson would text an update to Chris Johnson every few days, and Chris Johnson would post those updates – some with photos and videos – to Facebook. The posts eventually had some 200 followers.

The Diner in downtown Smithfield, a favorite of Johnson’s, became the home base for his followers, who posted photos and updates from his journey on a wall there. It became known as the Appalachian Trail Shine, Johnson said.


Would he make it?


Before he left, Johnson said, his morning coffee group took bets on how far he’d get before ending his trek. “I don’t think it really hit us at first that he was actually going to go through with it,” Chris Johnson said.

But Chris Johnson’s money was on his friend completing what he started. “If anyone was going to do it, it was going to be Dave,” he said. “I always knew he’d get to the end.”

Most don’t; only about a quarter of people who start the trail complete it.

Johnson said he took comfort in knowing that folks back home were pulling for him. “As I was getting discouraged, I knew there was this whole group behind me,” he said.

For Johnson, the trail became most challenging in Pennsylvania. “It’s the most difficult terrain because it’s just rocks, and you’re never getting good foot plants,” he said. “Your feet and ankles are sore and bruised; a lot of people get off there.”

But Johnson said he knew his friends in Smithfield would never let him live it down if he quit.

“I just kept thinking, ‘I can’t quit. I can’t come back and have coffee ever again if I quit,’ ” he said, laughing. “I think I was locked in more than most people because I knew I’d be ridiculed if I came back early.”

The lowest point for Johnson came when he fell in New York and injured his arm. “I was bleeding and secretly hoping it was broken so I could go home,” he said. “I was so tired.”

But then the kindness of a stranger intervened. A retired FBI agent gave him a place to stay for a few days after getting him fixed up.

Such moments helped restore his faith in humanity, Johnson said. “It wasn’t just the people I met on the trail,” he said. “It was also what they call ‘trail magic,’ which is where people will set up things along the trail to help you out.”

People, including former hikers, set out coolers with drinks and snacks, hold barbecues or set out supplies for hikers, Johnson explained.

“You get to this low point because so much of it is just a mental push to keep going each day,” he said. “And then when you’re not expecting it, you round a bend and see a cooler with a note, and it just lifts your spirits and keeps you going.”

After the fall, it helped too that he caught back up with Mom and Orbit, Johnson said. “After I fell and got back on the trail, I was really bruised up, and then I ran into them again, and it gave me a boost,” he said.

He got a lift too from the folks back home, Johnson said. “To think that all those people were there at The Diner supporting me and following my progress,” he said. “I kept thinking, ‘Oh my God, you can’t quit; you have to keep going.’”

Before he left, Johnson said, a friend, Martin Tetreault, gave him a cross on a necklace blessed by his priest. While the necklace broke along the way, Johnson said he carried the cross in his wallet.

He also picked up four small rocks, one for each of his children, at the beginning of his hike and carried them all the way to the end.

“I put them in my first aid kit bag and carried them the whole way,” he said. “And I’d pray for each one of my kids and try to meditate on the trail during the quiet times or when I was lonely, because you can either think about the good things or the bad things.”

“I knew people were rooting for me, and so I tried to keep good thoughts going and make the most out of my time,” he said. “Other people made sacrifices so I could be out there for so long, and I just knew I had to do it for them.”

Among those people was his wife, who not only sent supplies but visited at stops along the way. Sometimes she even brought Maizy with her.


Though Johnson completed the trail, he’s not tempted to try it again. “It’s too much of a time commitment and too much to put on other people,” he said. “I would like to go and give back by leaving some trail magic like others did for me. It’s the support and the people who are there for you, even if they don’t know you, that makes the difference.”

Johnson doesn’t think he’s anything special because he made the trek. “All I did was get up and walk,” he said. “You learn a lot about yourself, you know more about your strengths and weaknesses, but it was really more about the people who were there for me every step of the way in my heart or right there on the trail alongside me. That’s what made it worth it.”

Johnson’s family, friends and fans held a welcome-back party for him Sept. 16 at The Diner, where he told stories from the trail and celebrated what had become an accomplishment for everyone.

“They’ll never know how much that support meant to me out there,” he said. “I never would have made it without them.” 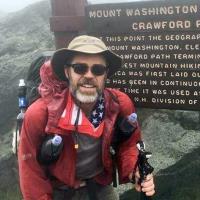