Chamber promotes its federal agenda while at Washington Business Summit 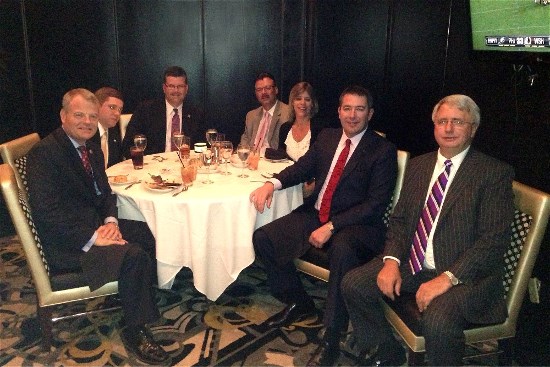 While the Chamber is on record supporting the improvement of Interstate 95, we find the proposed tolling plan released by the North Carolina Department of Transportation in 2012 to be unacceptable. The plan is grossly unfair to the thousands of citizens and businesses located on or near the interstate. It would put local areas at a disadvantage in recruiting new residents and businesses and would place an undue burden on local users of I-95. A recent survey of the Chamber membership indicated overwhelming opposition to the NCDOT plan. We call upon federal, state and local officials and authorities to make it a priority to arrest the current and continuing deterioration of I-95, and to find a funding mechanism that is fair and would have minimal impact on commercial enterprise.

The Chamber would also like to mention the importance that U.S. 70 plays in our area and in eastern North Carolina. With our area’s proximity to North Carolina’s ports, military bases and the Global Transpark, continued attention to this highway will help foster economic development from Raleigh to the coast.

We ask that you do what you can to persuade the Federal Highway Commission to make the improvement of Interstate 95 a priority and to look at alternatives to the January 2012 toll plan proposed by the NCDOT.

Agribusiness is extremely important to the Smithfield-Selma area and Johnston County. Our towns have relied heavily on rural economic development programs through the United States Department of Agriculture. The current farm bill defines a rural community as one with 10,000 or fewer people. With the explosive growth in our area during the last decade, the 2010 census indicated some towns, such as Smithfield, have populations that have exceeded this threshold, even though they are still rural, small towns. These towns could lose access to U.S. Rural Development loans.

We ask that the population threshold be increased to at least 20,000 in the farm bill to allow our municipalities to have access to U.S. Rural Development loans and programs.

The availability of natural gas is an important infrastructure need in recruiting new business and industry to the Smithfield-Selma area. Currently, Piedmont Natural Gas operates and maintains a 10-inch natural gas main that generally traverses Johnston County from east to west. In addition to transmitting quantities of gas, numerous two-inch and four-inch laterals extend from this line to provide gas service to the towns of Benson, Clayton, Smithfield, Selma, and Wilson's Mills. With increased growth commercial growth in the area, natural gas needs are increasing.

We ask that you continue to make elected leaders and the Chamber aware of grants and other programs that might be available to expand natural gas in our communities.

The Chamber’s Board of Directors opposes the Employee Free Choice Act as it has been proposed in the past. Sometimes called “Card Check,” the act would make it easier for unions to organize in North Carolina and reduce the rights of employers. Particularly unsettling is the provision that would deny the right of workers to a secret ballot election.

We urge members of the North Carolina Delegation to oppose the Employee Free Choice Act.

The Chamber asks you to support workers and their families by opposing any tax consequences to employee health insurance benefits.