The Jimmy Creech Small Business Award Presented to Ray and Rose Pittman by Crystal Roberts at The Annual Meeting on January 26th, 2015

The Jimmy Creech Small Business Person of the Year Award is given in memory of the 1976 President of the Chamber. Mr. Creech operated Creech’s Pharmacy in downtown Smithfield for some 40 years and was the epitome of a business and community leader. The award is given to people who emulate this fine man. It is sponsored annually by Stancil Oil Company.
If your bucket list includes a trip to a warmer climate with blue skies and blue water, well, we wish you the best. But the next best thing might be comfort food in a friendly atmosphere served up by a duo whose commitment to this community is unmatched.
Rose and Ray Pittman, proprietors of Hula Girl Ice Cream and Grill, are celebrating their eighth year as business-owners in Selma. They started with a concession stand trailer, and then moved into the front of a building; continued growth then allowed them the opportunity to take over the entire building. Last year, they opened Hula Girls Catering and Venue for private parties, weddings and other special events.
Rose is a retired guidance counselor who served the Johnston County Schools for the last 15 years of her career. The Fayetteville native is a Campbell graduate with two Master’s degrees, who even as a beginning teacher would wait tables as a second job. Ever the restaurateur, she is an avid cook who originally thought to sharpen her skills in culinary school. Although education took the forefront, she worked part-time in the industry, even writing a popular cookbook filled with her grandmother’s mouth-watering delights. She personally sold 1,000 copies of the book, called Sally Bett Originals, which she is re-publishing much to the delight of her followers.
Her passion is accompanied by sweat equity. Their success—which Rose calls modest—has been built on simply on hard work. “It’s hard work. No one gave us anything.” But she credits her community as well.
“The community of Johnston County and surrounding areas has caused us to be successful,” says Rose, who notes that unlike a chain, Hula Girl had no corporate backing or built-in brand.
Ray and Rose are committed to giving back, even as they seek employees who are interested in the food industry and have a passion for it. And part of that commitment has been their Chamber involvement.
“If we work as a cohesive team, we make all of our businesses successful.”
This particular award is named after Jimmy Creech. For those of us who didn’t know Mr. Creech, he was a man of integrity that knew the power of helping others and giving back to his community. The recipient of this award is someone who should mirror those qualities, and the Pittmans certainly do just that. Ladies and gentlemen, join me in saluting Ray and Rose Pittman. 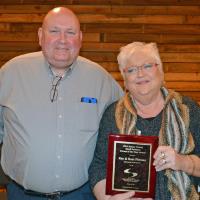