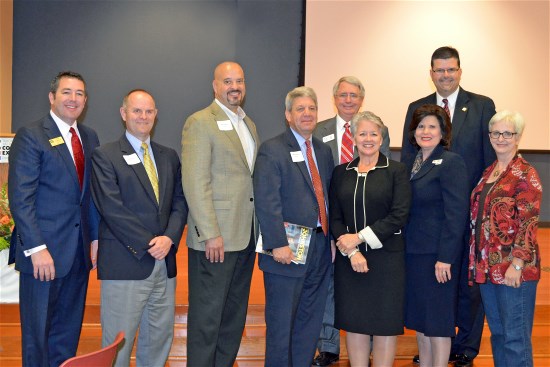 North Carolina’s secretary of commerce visited Johnston County last week, outlining five ways the state can grow its economy and how Johnston is well positioned to be part of that growth.

Sharon Decker was keynote speaker for the annual Johnston County Economic Development Luncheon, held Oct. 29 at the Agricultural Center near Smithfield. The county’s chambers of commerce hosted the luncheon, and the 180-plus audience came from business, nonprofits and local government. Duke Energy was the presenting sponsor for the event.

Decker first spoke about Johnston County’s advantages. Although growth of the state’s urban centers is important, North Carolina is ultimately a rural state, she said. Johnston County is in the middle – close to the urban Triangle but benefiting too from growth driven by the economies of its town. Those strengths, combined with ample infrastructure, growing highway corridors and a large farm industry, make Johnston County strong, Decker said.

“I would tell you that you folks are sitting in a very good position for growth, as you can capitalize on the growth that is happening in the Triangle (and) the growth that you can initiate right here in your own community,” she said.

Decker then outlined five areas where North Carolina can grow its economy:

“Every North Carolinian deserves to live a healthy life,” though not all choose to do so, Decker said.

She said all North Carolinians should have access to health care, clean air and water and healthy foods. The state needs to focus also on childhood obesity, she said.

Keeping citizens healthy brings in business, Decker said, because one of the fastest-growing costs in business is health insurance for employees.

“You cannot separate education from economic development,” she said. “If you do not have a good, strong education system, you will not be attracting businesses to your state.”

Two of the state’s most important industries are advanced manufacturing and agribusiness, she said. But schools don’t necessarily encourage young people to pursue those fields.

Decker shared an experience from her childhood. Growing up in a mill town, she said her parents would tell her, “You can grow up and be and do anything you want to be and do, but for God’s sake, don’t come back and work in the mill.”

She posed the same question to the audience: “You can grow up and be and do anything you want to be, but don’t come back and what? Work on the farm?”

But parents should be encouraging their children to pursue agribusiness and advanced manufacturing, she said.

The state needs not only roads, trains and airports but also communication infrastructure. Deckersaid people should be able to do business and communicate in the state’s most urban areas as well as its most rural.

Decker sees at future in exporting North Carolina’s products; right now, only about 2 percent of businesses export products to other countries, and of those, most export to just one country.

Culture and quality of life

Tourism, arts, travel and culture, along with Decker’s fifth area – quality of life and environment – are important for the state’s growth.

Decker said she asks CEOs why they chose North Carolian for their businesses, and the answer often comes down to quality of life. “We just liked it” is a common response, she said.

Decker said people who grow up in the state often take for granted its culture and quality of life.

“The richness of our community, what you create at gatherings like this, is one of the greatest advantages that North Carolina offers,” she said. “Not everybody works and lives like we do.”

“We’re right in the crosshairs of tremendous growth,” he said. “We will not be selling out of an empty wagon, that’s for sure.”