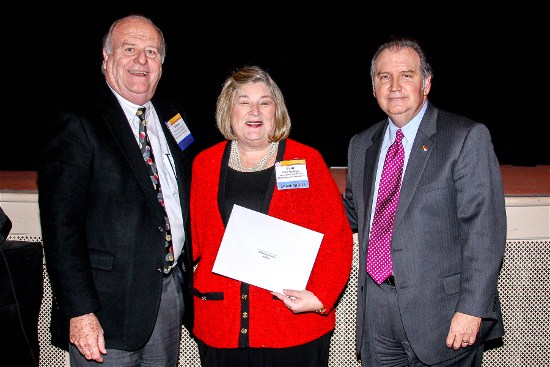 SALISBURY - On Thursday, January 31, Millard and Patricia Stallings were honored as 2012 Main Street Champions at the North Carolina Main Street Annual Awards Ceremony in Salisbury. The Stallings were selected by Downtown Smithfield Development Corporation for this special recognition in appreciation of their exceptional contributions to the downtown revitalization process. Along with Champions from 30 other communities, they received a certificate commemorating this designation, presented by N.C. Deputy Secretary of Commerce Dale Carroll and Office of Urban Development Director Liz Parham.


“Main Street Champions are those individuals who lead by example. Whether they renovate a building, open a business, volunteer their services, or rally the troops, they step out in front and encourage others to follow. They are recognized for the dedication to their communities that furthers the efforts of downtown revitalization,” said Parham.


In recommending the Stallings for this honor, Downtown Smithfield Development Corporation offered the following:


Main Street is a downtown revitalization program for smaller towns based on economic development within the context of historic preservation. The North Carolina Main Street program, which provides technical assistance to its communities, is part of the Office of Urban Development in the Department of Commerce’s Division of Community Assistance.


In 1980, North Carolina was one of six original states, selected from 38 that applied, to launch the work of the National Trust for Historic Preservation’s National Main Street Center. The North Carolina Main Street program began with five participating cities – New Bern, Salisbury, Shelby, Tarboro and Washington – in September 1980 and has since grown to include 61 communities across the state.