Although just 45 minutes away from Raleigh, communities in rural parts of the Triangle’s outlying counties face much different economic development challenges than Wake or Durham.

Just to the east, Wilson and Edgecombe counties have an unemployment rates of 9.4 percent and 9.3 percent, respectively, the third and fourth highest in the state in November. At 4.9 percent, Johnston County’s unemployment rate is considerably lower, but 50,000 residents leave the county every day to work elsewhere.

“The world is flocking to urban areas,” said Charles Hayes, president and CEO of the Research Triangle Partnership.“We have to swim in that stream,” he adds, but also that rural communities can at times “go against the flow.”

Hayes joined economic development leaders from Johnston, Edgecombe, Nash and Wilson counties to discuss their economies and what they are doing to bring economic development to eastern North Carolina. The summit at Wilson Country Club was hosted by Triangle Business Journal.

Jennifer Lantz, executive director of the Wilson Economic Development Council, called Wilson a “study in contrasts.” She highlighted that Wilson has a high manufacturing employment base and high average wages. However, it also has the highest unemployment and poverty rates.

Lantz talked about a shift in thinking toward a model that helps industries as they automate. Even though that reduces jobs in the near-term, it can save other jobs in the long run by cementing that industrial base in the county.

Chris Johnson, the director of Johnston County Economic Development, said the county faces infrastructure challenges like schools and water treatment facilities as population has boomed. However, he also highlighted that much of the growth has happened in the northwest corner of the county closest to Wake County.

Lantz said her goal was to bring 5,000 new jobs to Wilson County in a continuing process over several years. “We’re not hunting the buffaloes,” she said.

Hayes reminded those in attendance that the state shouldn’t think about economic development as rural vs. urban. He used the MetLife announcement as an example. “They were never going to come to Edgecombe County,” he said. “They just weren’t.” 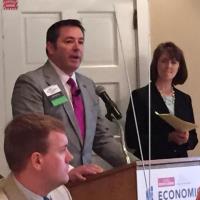