The Naming Ceremony for the Johnston Health Clayton Chapel was held on January 21, 2016, in honor of Ayden R. Lee, Jr. and Betty J. Lee.

Going forward, Johnston Health Clayton’s Chapel will be known as the Ayden R. and Betty Lee Chapel.   To quote a portion of the plaque displayed at the Chapel entrance . . . “During his tenure as CEO, president and chairman, he instilled within the bank a deep appreciation for its “real” assets, which he has defined as the customers, and the staff and managers who serve them.”  It also reads, “Through the years, he and his wife, Betty, have faithfully supported the communities the bank serves. Following the couple’s lead, the bank has contributed to causes and participated in events, civic clubs and fundraisers. By their example, the couple has helped shape Four Oaks Bank & Trust into a company that invests in communities, believes in the potential of people, and embraces the business model of banking on relationships.”

The naming of the Chapel at the Johnston Health Clayton facility will serve to commemorate Ayden Lee’s thirty-five years of steadfast leadership and profound dedication to Four Oaks Bank & Trust, and also to honor these lifelong Clayton residents for their many years of service, commitment and support of the Town of Clayton and the surrounding communities. 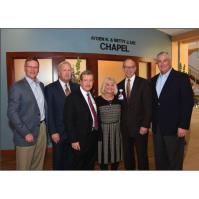