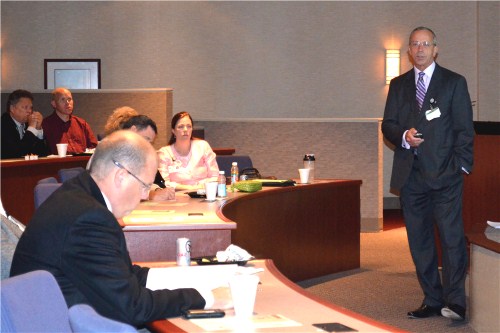 The county-owned hospital system plans to add 50 inpatient beds at its hospital in Clayton and eight inpatient rehab beds in Smithfield, Elliott said during a presentation titled “The Future of Johnston Health.”

Within two years, the CEO continued, Johnston Health hopes to build a chest-pain center and a stroke center. And over the next 12 months, he said, the hospital systems plans to add eight doctors to its medical staff, including three specialists in internal medicine.

Finally, the hospital plans a $1.5 million expansion of its emergency department in Smithfield, Elliott said. He hopes the expansion will help serve the growing number of mental-health patient coming to the ER.

More mental-health patients are using emergency departments since state lawmakers shifted responsibility for more of their care to local health-care providers, Elliot said. “What’s happened is a lot of them don’t have access (to care), and they’re coming into the emergency department,” he said. “They’re in rooms where we could be seeing folks with broken legs and things of that nature.”

One life-saving service Elliott wants to add in Johnston County is heart-attack care. The CEO said an outdated state regulation keeps Johnston Health from treating heart-attack victims. But advancements in technology have made it possible for smaller hospitals like Johnston’s to offer such care, Elliott said. Instead, Johnston ambulances continue to carry heart-attack victims to Wake County.

“Right now, if a patient is across the street from the hospital, they have a heart attack and they get picked up by EMS – they’ll take him away,” he said.

Elliott said he expects state regulators to clear Johnston Health for chest-pain care in about a year.

The CEO also talked about Johnston Health’s search for a larger partner to infuse the hospital system with resources, including funding for expansion projects. Last week, Johnston Health announced that its board, led by Chairman Ralph Stewart, had narrowed the number of suitors from five to three. The board is now considering UNC, Vidant Health and WakeMed. Stewart said those three had offered to allow the county to keep control over its hospitals.

During the question-and-answer part of the breakfast, Cookie Pope, who sits on the Johnston County Board of Commissioners, told Elliott to keep authority within the county. “Don’t you give my hospital away,” she said. “We don’t want the county to lose control.”

Elliott said local control was one of the chief criteria the hospital system was looking for in a partnership deal. But having a larger partner with greater resources will shift some power away from the county, he said.

“They’re going to bring some capital to the table,” Elliott said. “When they do that, they’re going to have some say in how that capital is used and how we proceed going forward.”

Theresa Daughtry, part-owner of a commercial realty firm in Smithfield, wanted to know if the public would have any role in choosing the partner.

Elliot said the hospital board, with input from county commissioners, would make the call. And because the negotiations are sensitive, the board won’t bring the public into the loop until it has narrowed its choice to one, he said.

“We can’t give you the particulars of the proposals at this point,” Elliott said.