Johnston County's economic development year was like none other

Johnston County has no doubt seen its share of bumper crops, but nothing might ever compare to the past 12 months.

When the Novo Nordisk and Grifols expansions are in full swing in a couple of years, their construction zones, with a combined 5,000 workers, will be the fourth largest town in Johnston County. Of the $3.4 billion in planned investments announced in the Triangle last year, $2.14 billion came from Johnston County projects. Novo alone is North Carolina’s largest private investment ever – and the biggest pharmaceutical project in the world.

The county’s industry leaders and many elected officials gathered Aug. 31 at the Johnston County Agricultural Center for an economic-development recap of the past year. The recap of Johnston became a recap of North Carolina too, as the county gained and lost the state’s two biggest projects, the $1.8 billion Novo Nordisk expansion and CSX’s Carolina Connector, a $300 million cargo-container hub, which eventually landed near Rocky Mount. In any other year, Grifols’ $210 million expansion would have dominated the conversation, but for 2015-2016, it was more like a cherry on top.

“I can’t think of any other county in the state that had as great a year as Johnston County had,” said Chris Chung, chief executive of the Economic Development Partnership of North Carolina.

Sergi Roura, president of Grifols Therapeutics, tried to put into perspective the size of the game Clayton is playing in. The company has manufacturing plants in Barcelona, Los Angeles and Clayton, that’s it.

“We always think maybe Clayton should try and get the Olympic games,” Roura said. “Maybe it takes a while, but you have to think big. And with all we are doing in this community, why not think about it, right? We can maybe leave some events to Raleigh, but mainly in Clayton.”

Roura said the Clayton plant is already the world’s largest manufacturer of blood plasma proteins, and with the coming expansion, by the end of the next decade, production will have doubled.

Since the spring, Novo has been grading the land at its Powhatan Road expansion, and site manager Matthew Kuntz said the company expects to start pouring foundation in the next three months. It was around this time last year that the Danish insulin maker announced its $1.8 billion plan, but other than excavating a large cornfield, it’s been hard to grasp how large those plans are. Kuntz said the fence-line around the property will be 2.5 miles; the property itself will be 95 acres. Johnston County’s economic-development director, Chris Johnson, put it a different way.

“I think a lot of people don’t realize how big $1.8 billion is,” Johnson said. “If you take the town of Clayton, everything in the city limits, every Wal-Mart, every gas station, every home and added them all together, it wouldn’t equate to what Novo Nordisk is getting ready to spend.”

Beyond the year’s successes, Johnson asked the business community to think about how to sustain the county’s growth. At this point, he thinks building shell buildings on spec is the way to go. The companies calling his office are looking for something larger than old tobacco warehouses, Johnson said.

“We have a very low supply of buildings,” he said. “More and more industries are looking for existing buildings. We have plenty of land here.”

Chung sang a similar tune. He said companies starting their site search through his office are usually larger, with 70 percent looking to simply move into an existing building.

Site selection proved key earlier this year as CSX tried to put its railroad hub on land between Selma and Micro. The problem, no one bothered to ask the landowners, and very public opposition chased the project to Rocky Mount. For Johnson, the project seems to be the one that got away, though thankfully for Johnston County, not too far.

“Obviously we know we missed out on an opportunity here in Johnston County,” Johnson said. “The Carolina Connector was probably one of the best projects I’ve ever worked on. But I’m happy North Carolina was able to salvage it. We’re going to see the benefit of that project. I got a (request for information) yesterday from a manufacturing company that would mean 500 jobs. They said they wanted to be within a 50-mile radius of the hub. People are already asking for it.” 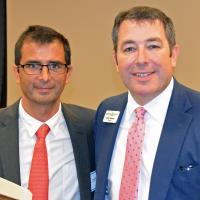