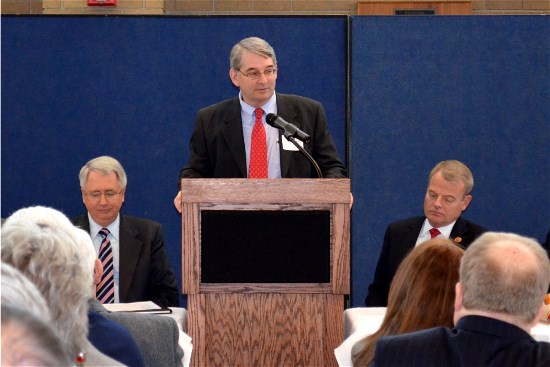 Tax reform, fracking and Interstate 95 tolls were atop the agenda at the annual Johnston County Legislative Summit last week.

The number of General Assembly members representing Johnston doubled from three to six this year, thanks to a redistricting process that carved up the county. All six lawmakers – Sens. Brent Jackson and E.S. Buck Newton and Reps. Leo Daughtry, J.H. Langdon, Ronald Rabin and William Brisson – were on hand for the event, a luncheon at Johnston Community College.

U.S. Rep. Mike McIntyre, a Democrat whose district was redrawn to include Johnston County, was there too.

Jobs and the economy were the most-pressing concerns, and the delegation had different ideas on how to lower the state’s stubbornly high jobless rate. A few of them, including Newton, said allowing drilling for natural gas would create jobs across North Carolina.

“A lot of people don’t realize the potential rural North Carolina has in this area,” said Newton, a Republican.

The natural-gas reserves aren’t in Johnston County, but they’d probably still bring jobs to the county. The shale-gas industry would create many indirectly-related jobs, including jobs in metal work and distribution.

“If we had done this 10 years ago, we’d have those thousands of jobs to ride us through the recession,” Newton said.

Drillers would reach the gas reserves through a process known as hydraulic fracturing, or “fracking” – pumping pressurized water into the ground to bring out the gas. Fracking creates waste that many people fear could seep into the groundwater supply.

Newton said the practice has been done safely in other areas of the country – most notably in Karnes County, Texas. “There’s a lot of scaremongering going on, but you know what? If they can do it safely … so can we,” Newton said.

The impact fracking has had on its communities is unclear. Earlier this month, some ranchers in Texas told a local media outlet that fracking companies were using too much water.

Some scientists, meanwhile, are troubled by a possible link between fracking and earthquakes in Colorado, Oklahoma and Texas. That was a major topic at the December meeting of the American Geophysical Union, according to the MIT Technology Review.

State Sen. Ronald Rabin, a Republican, said he was in favor of bringing gas exploration to the state, but he said he wanted the General Assembly to take the time needed to enact good regulations.

“If rules aren’t developed properly, it could have an adverse effect,” Rabin said.

Jackson said he expects a tax-reform proposal to come out soon. “There’s been a lot of versions thrown out there, (but) nothing’s come out in print,” he said. “We’re tying to be fair and equitable to everybody.”

Several chambers of commerce in Johnston sponsor the legislative summit, and leaders were happy to hear lawmakers talk about tax reform.

Jim Godfrey, president of the Clayton chamber, said the state needs an overhaul to bring in the jobs it’s been losing to its lower-tax neighbors. “As a state, we don’t compete very well with South Carolina, Virginia or Tennessee,” he said. “Now the only way to bring those jobs is to have those competitive tools.”

A few lawmakers panned a proposal to toll I-95 in North Carolina. Newton said it would hurt trucking and distribution businesses and it could scare away new jobs.

McIntyre promised to fight the proposal “tooth and nail.”