Inclusion Park leaders are 2014 Citizens of the Year

Presented by Corina Knott at 45th Annual Meeting on January 26, 2015

The Smithfield-Selma Citizen of the Year is given annually to a person or persons who have contributed extraordinary service to this area during the past year. The award is sponsored by Woody’s Computing Service.

Tonight we honor two people who would do just about anything for a cause that was near and dear to their heart. They have even been known to serve jail time and kiss farm animals if there was money involved and it was promised to go to a worthy cause. More on that later… Tonight it is my pleasure to share with you a little about these two very special people, Chris Key and Dwight Morris.

Many of you have heard about a community project going on in Johnston County called “The Partnership to Build a Miracle” and if you haven’t, these guys can twist your ear on the subject for a bit. This park (which broke ground this November) is the areas first and ONLY inclusion park…meaning a park for children of ALL abilities. This park is a big deal for our community.

In 2011 during a Partnership for Children board meeting a member brought up the fact that there was no place in our community for children to play that had special needs. So Chris and Dwight decided to put together a small committee of folks to talk about remedying this problem. They held monthly meetings and started a capital campaign to raise money to bring this type of park to our area.  They created a video and a brochure and carried each to any group that would listen to them talk about this important project. It was a slow build, but eventually word was getting out about the park, and the response from the community was positive!

So back to the farm animals and jail time.

Knowing that they needed to still build momentum for this cause their committee decided they needed to add some fun fundraisers to the mix. People raised money to watch Dwight Morris kiss a pig, and the Sheriff “threw” Chris Key in jail until he raised enough “bail money” to get out.  Both events were huge successes and raised money as well as garnered more attention for their worthy cause. Y’all it takes special people to kiss a pig and go to jail. These guys go the extra mile for causes they believe in, that is for sure.

The last 3 years these men have worked tirelessly on securing grants, and getting donations for this park. While they have hit some stumbling blocks along the way they never quit, and their hard work is going to pay off because come early summer we will all be applauding their efforts as we cut the ribbon to Johnston County’s first park for ALL children.

Chris and Dwight believe in serving the community they live in and their service doesn’t end with the inclusion park.

Chris Key is an Accredited Asset Management Specialist and owns Aspect Financial in Smithfield. He is very active in the Central Johnston Rotary club, and has served as a past president of the club. He has also served for many years on the Chamber’s board of directors, and was the board chair in 2010.  He is a graduate of NC State University where he as a cheerleader and very active in the Tau Kappa Epsilon Fraternity.

Dwight Morris spends his days, and sometimes evenings too as the Executive Director of The Partnership for Children of Johnston County, a non-profit that through state and private funding provides programs, and services for families with young children in Johnston County. He is an active member of the Central Johnston Rotary Club, and will be the 2016 Board Chair for the Smithfield Selma Chamber of Commerce. He also serves on the Greater Triangle United Way board.  He is a graduate of Erskine College in South Carolina.

I am lucky enough to serve and have served in various capacities with these men whom I now call friends. I can tell you first hand that both of these guys are the real deal. They are genuine, personable, thoughtful visionaries. Without them the inclusion park would probably never even been conceptualized, and we certainly wouldn’t be building it this year.

These gentlemen are leaders in our community. They don’t just talk about what they will do to help our community they figure out a way to do it. In June we will all be playing in the Inclusion park and we have Dwight Morris and Chris Key to thank for that. They work daily to improve the lives of the people around them in our county. That is why it is my pleasure to announce that Dwight Morris and Chris Key are the Chamber’s 2014 Citizens of the Year. 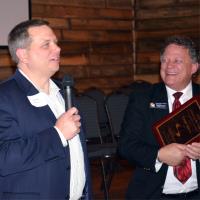