I-540 southern loop moves one step closer to fruition

The effort to complete the 540 Outer Loop around the greater Raleigh area has cleared a significant procedural hurdle, the N.C. Department of Transportation says.

The Federal Highway Administration has signed off on an environmental impact statement for the project. The FHA’s approval will allow NCDOT to begin holding public meetings to allow area residents to weigh in on the proposed routes for the highway. Those meetings are expected to begin in early December, NCDOT says. The Triangle Expressway stretches from N.C. 147 at Interstate 40 near Research Triangle Park to the N.C. 55 Bypass in Holly Springs.

NCDOT will rely on data from the draft environmental impact study and feedback from the public meetings to determine the path the route will take.

The “Complete 540” project is designed to extend the Triangle Expressway from the N.C. 55 Bypass in Apex to the U.S. 64/U.S. 264 Bypass in Knightdale. Once complete, the 540 Outer Loop is expected to alleviate congestion on I-440, I-40, N.C. 42, N.C. 55 and Ten Ten Road. Drivers coming from the south would be able to skirt much of the traffic in south Raleigh up through Raleigh-Durham International Airport and the Research Triangle Park by getting onto the 540 Outer Loop much more quickly.

The FHA was expected to sign off on the environmental impact study this summer. But because it was only approved recently, NCDOT says that will affect the construction timeline for the project.

NCDOT plans to build the project in three phases. “Depending on available funding, each project will likely have different construction time lines,” the department says.

Joe Milazzo, executive director of the Regional Transportation Alliance business coalition, says the delays to the project will ultimately be worth it.

“We’d like the project to be done yesterday, but we understand there is a process,” Milazzo says. “This is a project that will affect the region’s future for the next 10, 20 or 30 years. A few extra months are not a big deal if it ensures the project is successful on the backend.”

Earlier this year, NCDOT embarked on the first major expansion of the Triangle Expressway, which was driven by the growing population in the region. NCDOT began construction on a new $18.4 million interchange on the toll road at Old Holly Springs-Apex Road, just south of Apex.

An NCDOT representative wasn't immediately available to say what role tolls could play in the Complete 540 project. 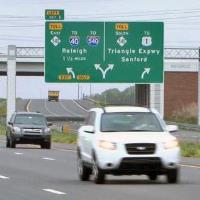