I-42, I-87 are numbers for future eastern NC interstates

North Carolina has received approval for the names of two new interstate route designations in the eastern part of the state, that’s according to a press release from Governor Pat McCrory’s office. The release states that the American Association of State and Transportation Officials approved I-42 for the U.S. 70 Corridor between I-40 in Johnston County and Morehead City, and I-87 for U.S. 64/17 between Raleigh and the Hampton Roads area of Virginia.

“These connections are an integral part of my 25-Year Vision for North Carolina to improve the state’s infrastructure, expand economic opportunities and create jobs,” says Governor Pat McCrory. “They bring a much-needed interstate corridor to the Hampton Roads area, stronger connections between our important military bases, and enhance economic development through faster shipment of freight for our ports and Global TransPark.”

Future Interstate 42 would generally follow the U.S. 70 corridor southeasterly, connecting Garner, Clayton, Smithfield, Selma, Goldsboro, Kinston, New Bern and Havelock with the Port of Morehead City. I-42 would begin at the current systems interchange with I-40 near Garner and follow U.S. 70 southeast toward Smithfield, Selma and I-95. Near Goldsboro, I-42 would overtake the U.S. 70 Bypass around the north side of the city. A possible new bypass, currently unfunded would carry I-42 around the south side of Kinston connecting with the existing controlled-access and freeway portions east to New Bern. Southeast of New Bern, Future I-42 would follow another new bypass to the west of Havelock. Ultimately I-42 would end near the Port of Morehead City.

In addition to connecting Morehead City with the Raleigh area, I-42 would also link Seymour Johnson Air Force Base and Cherry Point Marine Corps Air Station to the Interstate system.

The N.C. Department of Transportation may now proceed with determining where “Future I-42” and “Future I-87” signs should be installed and pursue approval to install those signs from the Federal Highway Administration. 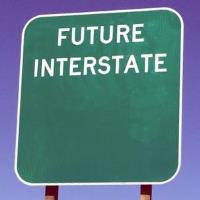