Group travels to Georgia to learn about economic expansion

A delegation of twelve community leaders from Johnston County traveled to Covington, Georgia on July 11-12 to learn about the impact that major economic development projects have on local communities.

“It was a great learning experience,” said Rick Childrey, president of the Greater Smithfield-Selma Area Chamber of Commerce.  “The Novo Nordisk and Grifols expansions will have a positive effect on every business in Johnston County.”

Novo Nordisk has just started construction of a $1.8 billion insulin-production facility across Powhatan Road from its current plant. Grifols is adding a $250 million addition to its US 70 campus. Thousands of construction workers will be in the area over the next several years prior to the addition of hundreds of new permanent jobs.

“With over 3,000 employees relocating to our area during the four year construction period, it is important that our County and Municipalities adequately plan for its economic impact.  During the peak of construction, the two nearby sites will have the same population as the Town of Benson” said Chris Johnson, Johnston County’s Economic Developer.

Georgia counties Newton, Walton, Morgan and Jasper, along with the cities of Covington, Social Circle Rutledge and others, have seen Shire Pharmaceuticals (formerly Baxalta) build a huge complex in a jointly-supported industrial park, adding over 1,500 jobs.

The Johnston County group met with city, county, chamber and economic development officials in Covington to learn of the impact that the building of such a facility had on schools, housing, tourism, local businesses, downtown development and emergency services.

“Their efforts also helped bring revitalization to the downtown and surrounding community. I was impressed with their positive community message,” said Julie Maybee who heads planning and economic development for the Town of Selma.

Tim Kerrigan with the Town of Smithfield agreed. “We learned of their obstacles and hurdles, their pitfalls and successes.  I believe that we have now positioned ourselves so that we may be better prepared to optimize the opportunities ahead of us. “

The tourism aspect of many construction workers coming here for extended stays will also be significant. Donna Bailey-Taylor, executive director of the Johnston County Visitors Bureau says, “The Visitors Bureau is currently building a ‘one-stop shopping’ landing web page to assist companies seeking hotels, dining, things to do, relocation information, and a host of services they will be utilizing. The Georgia communities have been working together to welcome Fluor (the construction company) and their subcontractors to the area.”

McDonnell summed up the trip in this way, “Four counties and numerous towns worked together for the common good. Their ‘if one town wins, then all towns win’ approach is now paying dividends for their area. Johnston County has the leadership in place to have similar success using this approach.” 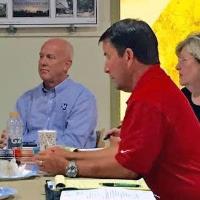