Sarah Gaskins and Clar McGeough have always enjoyed drawing pictures together, both in and out of the classroom.

The two 14-year-olds also share an affection for the greenway that runs through Smithfield. And as the friends would stroll along the Neuse River, they often wondered why only graffiti artists had taken the time to paint the vast concrete canvas formed by the Market Street bridge near Neuse River Amphitheatre.

When it came time to pick a project for their Girl Scout Silver Award, the highest rank in their age group, the girls decided to use their artistic gifts to fulfill the aesthetic need they saw in the community.

After months of planning, preparations and painting, Gaskins and McGeough have completed a vibrant, 1,300-sqaure-foot mural that fills every inch of the space under the Market Street bridge. Broken into five panels, the painting features stops along the Mountains-to-Sea Trail, including Grandfather Mountain, the Biltmore House, Smithfield, the Surf City Ocean Pier and Cape Hatteras.

Before the painting could begin, the girls spent almost a month of weekends scraping off graffiti and laying a base coat to prepare their canvas. After summer break started, Gaskins and McGeough worked 8 a.m. to 5 p.m. to get the mural painted in just over a week.

Spending that much time on the greenway meant they got to meet a lot of Smithfield residents, McGeough said, and they were encouraged to get positive feedback along the way.

“As we were painting, a lot of people passing by, they loved it.” McGeough said. “They were taking pictures, and they wanted pictures with us. Even if they weren’t talking to us, and they were just talking to whoever was with them, they were pointing out little details and parts they liked.”

The pair began sketching out ideas in February, and they originally planned to simply paint Smithfield and a variety of other North Carolina locations that they had visited together. Over time, they learned about the Mountains-to-Sea Trail, of which the Smithfield greenway is part, and they decided to paint a portrait of the state from the Appalachians to the Outer Banks.

Once they got started, Gaskins and McGeough realized they could also add the progression of the seasons to their work. Christmas trees in the mountains represent winter, and colorful leaves outside the Biltmore House indicate autumn. Springtime is depicted in Smithfield through agriculture – including a few hams and yams – and nothing says summer like the last two scenes at the beach.

“I thought it was pretty cool, honestly,” Gaskins said. “It just worked out.”

The mural’s central and largest panel showcases Smithfield. It depicts the Hastings House, the World War I memorial at the Johnston County Courthouse, and it includes a nod to the Ava Gardner Museum.

The public will have an opportunity to meet the artists at a ribbon cutting scheduled for 10 a.m. July 24.

The project required countless trips to the Sherwin-Williams paint store in Smithfield, and the girls thanked the store for giving them a generous discount and a line of credit. To pay off that tab, Gaskins and McGeough will look for a summer 2016 project that fits within the Girl Scouting’s guidelines for fundraising.

To differentiate themselves from the vandals who have painted the Market Street bridge in the past, Gaskins and McGeough worked with the Town of Smithfield to get approval before starting their project.

Before signing off, Smithfield insisted upon one change to the girls’ original artistic vision. They had planned to paint the Little Brown Jug because that bar sits right next to the bridge, McGeough said, but town staff asked them to portray a tribute to Ava Gardner instead.

“We weren’t thinking about how that’s actually a bar,” she said. “We’ve never been in, so we didn’t think about it, so we did actually change that.”

The Smithfield Town Council approved the project at its March meeting, and Gaskins and McGeough moved forward with the full support of the town.

The Smithfield Police Department took steps to protect the girls and their art until they could finish. Chief Michael Scott increased patrols to the area, and he had officers place police cones around the work site to deter vandals from adding their own artistic touches at night.

To protect the mural going forward, Gaskins and McGeough applied several clear coats of a product that protects public artwork from graffiti. With that step taken, it should only require soap, water and some elbow grease to scrub off any unwanted additions to their artwork.

Following a Monday night budget meeting, Smithfield Councilmen Andy Moore, Charles Williams and Perry Harris made a trip to the greenway to admire the finished mural and thank Gaskins and McGeough for their contribution to the town.

“I think it’s an outstanding piece of artwork for the citizens of Smithfield to enjoy,” Moore said. “When they came to the council and showed us their idea, I couldn’t imagine it would look like this. They’ve put a lot of work in.” 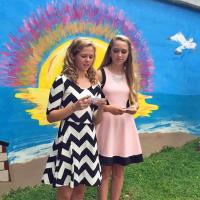