SMITHFIELD - One of downtown’s most popular eateries has a new name.

On July 1, Gandolfo’s New York Delicatessen opened its doors as Gotham’s Deli. The old red-white-and-green logo is gone, replaced by a new brand that features a silhouette of the New York skyline and blue-and-orange color scheme inspired by the New York Mets.

What hasn’t changed is the ownership and, for the most part, the food.

Scott and Lisa Gandolph still own and operate the restaurant, which they opened in 2003 as the 18th location of Gandolfo’s. The Gandolph family grew up on Long Island and Scott’s brother, Craig, opened the first Gandolfo’s in Utah in 1989.

When the contract with Gandolfo’s came up for renewal this year, Scott Gandolph said, the family decided to take the opportunity to go independent. So far, he said, the reaction from customers has been positive.

“Whenever I mention that I’m breaking away from corporate to do my own thing, I always get a thumbs-up,” Gandolph said. “I think most people would rather come to a mom-and-pop-type place than think they’re going to a chain.”

The menu still features a lot of the same New York deli sandwiches, although most of the names have changed. For instance, the “Knuckle Sandwich” has become the “Brass Knuckle,” and the “Urban Cowboy” is now called the “Urban Legend.”

When they printed up the new menus for Gotham’s, they did take the opportunity to tweak the fixings on a few subs, add some new choices and drop a few from the list. If anyone’s favorite sandwich is missing, Gandolph said, Gotham’s can always make it to order.

For breakfast, the new menu has the same New York-style breakfast sandwiches, and they’ve added plates of pancakes, french toast and omelets. The sandwich shop also has specialty coffees, smoothies and a much bigger selection of salads and hot dogs.

The restaurant remains a family operation, with Scott and Lisa working alongside their six children – Cash, Ashley, Bryce, Arianna, Scottie and Jessica – who range in age from 9 to 28 years old. Scott said he recently named Arianna the nighttime manager.

Gandolph hired Jeff Plowman of Smithfield to design the Gotham’s Deli logo, he said, and the trademark on the new branding is currently pending.

Looking toward the future, Gandolph said, Gotham’s plans to provide the quality of food and service that Smithfield came to expect from Gandolfo’s. And eventually, the newly renamed restaurant might even grow into a franchise of its own.

“If my kids wanted to open one one day, they would have that opportunity,” he said.

For more information, and to see the revamped menu, visit GothamsDeli.com. 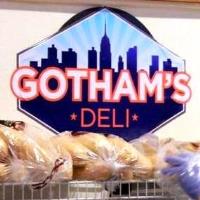