Congressman David Rouzer (NC-7) came to Johnston County’s only charter school this week to learn about the organization of Neuse Charter and meet its leaders, staff and students. This was the congressman’s first visit to a charter school in his district and the school’s first visit from a federal lawmaker.

“Charter schools are increasingly a more important part of education,” the congressman told a room of NCS board members, administrative leadership and others. “Thanks in large part to parents and community, that’s what public schools are missing.”

While the junior legislator serves on the House’s Transportation and Infrastructure Committee and Agriculture Committee, that doesn’t mean education isn’t a priority on his agenda. In fact, this past May he introduced a bill to dissolve the Department of Education, favoring giving more control to state and local leaders.

Rouzer explained his decision to propose the bill when he spoke with NCS seniors during a brief open forum.

“Federal government shouldn’t have anything to do with education,” he said. “That should be at the local and state level. The bill gives flexibility and latitude back to the state.”

While his visit spent time focused on state and federal education issues, he also learned how committees he serves on with oversight of the USDA helped the school obtain low interest funding for its current land and new buildings.

Chris Johnson, NCS board member, told Rouzer that the school board continually sought ways to work with local and state government to see how Neuse Charter could benefit. Rouzer brings a unique perspective to Washington, also having served as a state legislator for many years.

“We do a lot with less,” Johnson said. “That’s a tribute to the staff and students.”

While talking politics was a necessity, the best part of the congressman’s visit came from his time with the students.

The school band played a lively piece of music as the congressman approached the high school building and student ambassadors were at every door to meet and greet him as he walked the hallways and campus.

Fourth grade teacher Lisa Morgan’s use of the Kahoot quiz game system stumped the congressman a few times as he challenged fourth graders at a beat-the-clock type game about early Indian cultures.

Rouzer finished his time with the senior class talking about Congress and his district, but the key message most seniors walked away with was when he said, “You have a very impressive school here.” 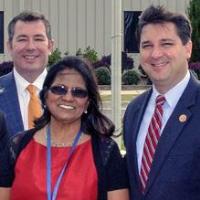