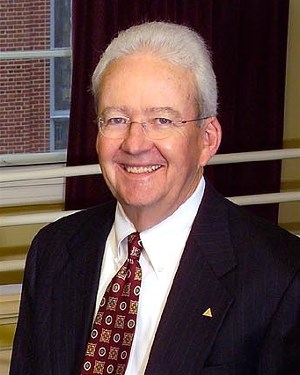 The Chamber recently presented a Distinguished Citizen Award to a person who has held numerous leadership roles and been active in the Smithfield-Selma area since locating here in 1961. He is Graham Riley Neville.

Graham has long been an outstanding leader and able to motivate others to work together for the common goal.  He has never been one to shy away from a challenge and has always been willing to offer alternative ideas and solutions.  Part of his impact in our community and success in business stems from his belief that you can accomplish anything more effectively if you can get people involved and moving toward established goals and objectives.

Our recipient developed a sense of business and personal relationships at an early age.  He comes from a small community in Halifax County, where as a teenager, he helped operate his family’s country store.  He attended the University of North Carolina at Chapel Hill and graduated with a BS in Business Administration in 1959.

Soon after he completed military service, he moved to Smithfield and entered the insurance business with his mentor, Clifton Moss.  Together they established an insurance agency, which later became Graham Neville and Associates and then Triangle Insurance Group.  In 1961 Graham also founded First Mutual Insurance Company - one of the most financially sound mutual insurance companies in North Carolina today.

His involvement in our community began right away when he met Tom Medlin who invited him to his first Jaycee meeting in 1961.   In 1968 Graham was chosen as Campaign Chairman for the Johnston County United Fund and elected President of the Smithfield Jaycees. The Jaycees served our community well with various fundraisers for charity.  One fundraiser in particular was the Miss Johnston County Pageant. Graham, who was and is happily married, must have had a way with the ladies as Jaycee President…during his term the reigning Miss North Carolina and the reigning Miss America were guest performers at the 1968 Miss Johnston County Pageant.  Bringing Miss America to our small community brought excitement to the area and is a feat that had not been accomplished before nor has been duplicated since.

In 1970 Graham was elected as President of the Greater Smithfield-Selma Chamber of Commerce - this was the first year the 2 towns combined to form one Chamber – Graham recalls some “Nay-Sayers,” but also recalls the number of things the Chamber accomplished that first year – among them: 1) Organized an Industrial Development team to promote Industry in our area 2) Initiated toll-free service linking Smithfield-Selma, Princeton, Kenly, Micro, Pine Level, and Four Oaks 3) Began discussions to locate the Chamber office between Smithfield and Selma 4) Initiated the project to have Highway 301 widened and lighted between Smithfield and Selma – This project took 15 years to come to fruition, but Graham has always held that "you will never finish anything, unless you start it first."

In 1970 Graham also received the Jaycee Distinguished Service Award for community contributions, evidence of leadership, and business and personal growth.”   In the mid-70’s he became the second Chairman of the Chamber’s Industrial Team, which was formed to promote development in Smithfield and Selma. During his tenure as Chairman, Oak Tree Corporate Park in Selma was developed through a partnership with the Town of Selma, the property owner and the Chamber. Today, three industries are located in the park, providing over 400 jobs to the area.

Church & God are very important to Graham – he has been actively involved in Centenary United Methodist church for almost 50 years, serving on several committees, and as Past Chairman of the Finance Committee and the Administrative Board

Since 1961 Graham has dedicated his professional career to the insurance industry. In 1978 he was among the first insurance agents in North Carolina to attain the designation of Certified Insurance Counselor.  He has been a 2-time President of the NC Association of Mutual Insurance Companies, a Past Board Member of the National Association of Mutual Insurance Companies and has served on the association’s National Legislative Steering Committee.

Today, Graham Neville remains active in business and in this community.  He continues to support his church and various other non-profit organizations. He is currently President of First Mutual Insurance Services and the Executive Vice-President of First Mutual Insurance Company, a mutual company he founded in 1961. He remains on the Executive Board of Triangle Insurance & Benefits and Triangle Insurance Solutions.  Graham currently serves on the Chamber’s Economic Development Committee, where he continues to offer thought provoking ideas to address the challenges that face our community today.

Graham has been happily married for 48 years to Angela Neville.  They have two children, Susan Sidebottom who lives in Summit, NJ and Dave Neville, another past Chamber Chair, who has been in business with Graham for more than 20 years.  He is the proud grandparent of 6 grandchildren and enjoys spending time with his family and playing golf.

Congratulations to Graham Neville, one of the Chamber’s 2012 Distinguished Citizens.