Boys & Girls Club Director is Tar Heel of the Week

SELMA - A half-dozen middle schoolers gather around the pool table at the Boys and Girls Club of Johnston County. It’s just after 3 p.m., and Mamie Moore stands at one side of the table, asking them about their school day.

One boy offers, a little sheepishly, that he had a hard time in math class. A girl says she felt really confident taking a test after having studied. A few hand over sheets showing they have no homework, or ask to check out recent updates to the new computer room.

“You may not have homework, but you need to study every night,” Moore tells the students. “That way, you never fall behind.”

The daily “pool table talks” start the students’ afternoons at the club, which has served more than a thousand local schoolchildren as it approaches its 10th anniversary.

Parents pay $10 a year for the daily after-school program where students do homework, play games, and participate in a wide range of other activities, from book clubs to art projects to science experiments. Affordable summer camps draw children from across Johnston County.

Moore has led the effort since its inception, working every day with students as a mentor, teacher and friend. She is constantly adding new ideas – some of them proposed by the children – whether it’s creating a walking club or conducting a Boys and Girls Club pilot program with daily activities in science, technology and engineering. Its book club won a state Boys and Girls Club award last year.

This fall, supporters are holding a series of fundraisers to pay for the club’s programming. Plans include expanding its reach to other Johnston County communities.

“[Moore] does so much for these kids, and for this community,” says Tammy Mitchell, who heads the board of the Boys and Girls Club of Johnston County. “She spends so much time planning and working with them, and she always seems to be doing something new.”

The Boys and Girls Club aims to provide after-school encouragement and enrichment, particularly to the children who need it most. For Moore, engaging dozens of children every day is second nature.

“I just enjoy being around them and talking to them and listening to what they have to say,“ she says. “Working with kids is just such an important commitment.”

Moore spent her early years in Smithfield, near Selma, but her family moved to Wake County when she was in middle school. She started her career in early childhood education, earning an associate’s degree from Wayne Community College.

She was working at a day care when she started volunteering with the Boys and Girls Club in Wayne County. She felt immediately that she had found her place.

“I was sold,” she says. “I loved how the club helped kids to feel empowered.”

The director there encouraged her to go from volunteer to employee, and Moore immersed herself in every kind of training the club offers its teachers, mainly through webinars.

She rose to director of that program, and went on to manage multiple programs in Lenoir County. When a group of area leaders in Selma decided to form the club there, Moore says she jumped at the chance to start a new club from the ground up.

Officials agreed to rent the group a building near the campus of Selma Elementary School for a dollar a year. A dedicated board and other supporters raise money year-round to the cover costs.

The four-room building has game tables, a computer room, a cafeteria and a classroom. It’s not fancy, but it’s been a lifeline for many families, in some cases providing the child care needed for a parent to work or go to school.

Moore remembers the first mom who signed her children up for the after-school program before it had even started. She had been leaving her two children home alone while she attended nursing school.

“She turned in her application and her $10, and she cried, she was so relieved,” says Moore. “Now she’s a nurse.”

What the kids want

About 60 to 80 students will come to the club after school on a given day, ranging from kindergarteners to high school seniors, though Moore says the wide variety of ages isn’t a problem.

Older students volunteer to help the younger ones, she says, including some from high schools who come in to help. Each year, students also compete for a Youth of the Year award, and last year’s honoree went on to win a regional award.

“For the older children, this gives them an opportunity for leadership,” she says.

Usually the children start out by doing their homework. From there, they do any number of large- and small-group activities. They might do something simple, like sing or play soccer outside, draw or read books.

But they also have more sophisticated activities. The book club has created a number of novel habits, like eating snacks related to each book and taking walking tours of local places that might have a connection to the book.

At one of the sleepovers they had as a reward for good behavior, students chose to hold a debate.

“I think always about what the kids want to do,” she says, “not what I want to do.”

Moore says a “DIY STEM” science program they’re piloting has been popular. Students do daily activities that lead to larger projects. For one, they built a robot loaded with markers that could be programmed to draw.

In October, the club will focus on physical fitness, participating in a 5K event that will benefit the club as well as a Boys and Girls Club fitness challenge. They’ll also be in the Smithfield Railroad Day parade.

Moore has taken students on several field trips. Through one grant, they were able to take a group of girls to Raleigh to visit N.C. State University, where they learned more about STEM topics. They’ve also visited N.C. Central University and Johnston Community College.

Soon, representatives of the Morehead Planetarium will bring activities to the club. For Moore, the contrast between all this and what might have happened otherwise is staggering.

“Many of these kids would be home alone if they weren’t coming here,” she says.

The children themselves are appreciative. Scarlin Rodriguez, an 8-year-old who attends Selma Elementary, was part of a group of students that made a paper house full of notes to thank Moore for all of her work.

“She’s so smart,” says Scarlin, “and she always helps us out.”

Born: June 1958, Wayne County
Residence: Wayne County
Career: Director, Boys and Girls Club of Johnston County
Education: A.A. early childhood education, Wayne Community College
Family: Two children
Fun Fact: Moore counts bowling among her hobbies, but she counts Foosball, which she plays at the club, as one of her best games. “Every once in a while someone will beat me,” she says, “but it’s not easy.”

Want to help? The third annual Color Outside the Lines 5K Walk/Run in Selma on Oct. 15 will benefit the Boys and Girls Clubs of Johnston County. A Nov. 4 Masterclass event at the Portofino Equestrian Center will feature two Olympic equestrians. Learn more at www.bgcjohnstoncounty.com. 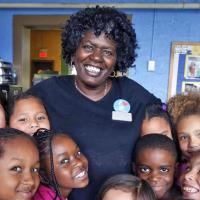