By Laura Finaldi
The Smithfield Herald

SMITHFIELD — A widening and second extension of Booker Dairy Road has made the short list of rural road projects that Gov. Pat McCory wants done right away.

To kick-start his 25-year transportation plan, McCrory wants the General Assembly to borrow $1 billion. In Smithfield, the money would reroute the eastern end of Booker Dairy Road, carrying it behind the shopping centers that are home to Belk and Walmart before intersecting with North Bright Leaf Boulevard. Also, the money would widen the road from that point to the Smithfield Recreation and Aquatics Center.

In 2011, the state extended Booker Dairy Road 2.3 miles from Buffalo Road west across the Neuse River and Wilson’s Mills Road to U.S. 70 Business. Construction on that extension, which cost about $14.3 million, began in 2009. Rerouting the eastern end behind the shopping centers was always part of the plan but had never received funding. The N.C. Department of Transportation estimates the remaining cost of the project at $9.4 million.

“It’s been part of the plan to put in a road for development, for new businesses to come to town,” said Smithfield Mayor John Lampe. “It’s all for good-quality growth and benefits.”

The DOT said it drew up the short list to see how far $1 billion would go. It includes more projects than the money could actually pay for.

Building the new extension will also aid economic development, Embler said. The town has already received inquiries for businesses and multifamily housing along the new road, he said.

Nell Howell, widow of Smithfield businessman and philanthropist Rudolph Howell, owns the land along the proposed extension, according to Johnston County property records. DOT spokeswoman Jennifer Garifo said the department has been in talks with landowners about right-of-way for the project.

If the Booker Dairy project doesn’t win bond dollars, it will still be eligible for funding through the state’s Strategic Transportation Investments Program, or STI, a data-based priority list for road projects. In the most recent STI rankings, the Booker Dairy Road project ranks 176th out of 650 regional projects.

Another Johnston County project that made the short list is the widening of N.C. 42 East from Glen Laurel Road to Buffalo Road. That project, which would also replace the N.C. 42 bridge over the Neuse River, would cost an estimated $20.3 million. It ranks 77th on the STI list.

For the short list, the DOT chose projects that were already partially done. 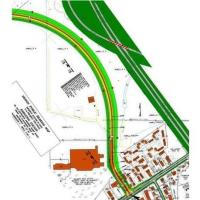