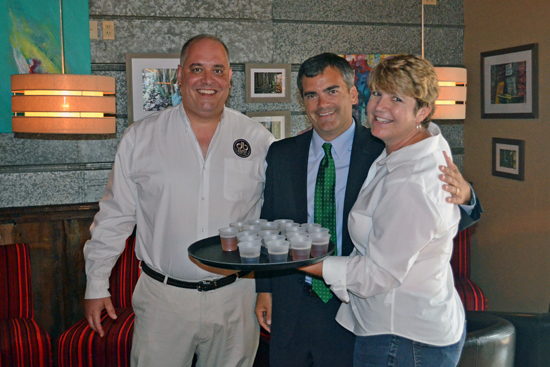 When Cheryl Lane gave her husband Larry a brew kit for his 40th birthday, neither thought the gift would lead to Double Barley Brewing, which opened this month on U.S. 70.

By training, the Lanes are mechanical engineers who graduated from N.C. State University. They live in Clayton.

What the Lanes have is a 20-barrel brew house, a tap room fashioned from the wood and tin of an old barn and 25 beer recipes.

The community’s support has helped the dream come alive, Cheryl Lane said. Forty percent of the company is in stock sold to friends and family. That money helped the Lanes lease a building and buy larger-capacity brewing equipment.

The couple also held a Kickstarter campaign to create a “beer garden.” In just two months, they exceeded their $25,000 goal, raising $26,465. The garden is an outdoor patio-like space where people can enjoy beer while listening to live music.

After Larry received the birthday present, the brew kit sat idle for a couple of months. Until, “on a cold winter day, I decided I was going to brew something,” he said. “And we brewed, and that batch turned out really good. I got the bug, started brewing. I’m a mechanical engineer. From the technical aspect, combined with being able to create a beer and flavor it the way you want, it is pretty neat.”

The Lanes had always wanted to own their own business, and after family and friends showed interest, they decided to move forward with a business plan.

Letters from their homeowners’ association also helped move things along; the brewing equipment had started in the garage but ended up out on the driveway for lack of space. The Lanes leased the building in July 2012 and have spent the last year putting the space together. They installed the brewery equipment just a month ago.

“We just always wanted to do our own thing,” Cheryl Lane said. “His beer was so amazing, I couldn’t deny that. I wanted him to have his dream, so he continued to brew and came up with 25 recipes, and the feedback was incredible, so we just decided to do it.”

For Cheryl Lane, this was also a chance to get back into the workforce after staying home to raise their three sons, who are now in high school.

Larry still works as a consultant, while Cheryl runs the business.

“We’re crazy,” she said. “I don’t even know how we did it. Everything happened in the right order to make this happen. Thank God we could raise the money in order to do it and do it the way we wanted.”

The brewery and the tap room had a soft opening on the third weekend of September. With just a Facebook post and a few texts to friends, more than 100 people showed up.

“People liked the beer,” Larry said. “It’s awesome to be able to make something that people really enjoy and to give them an environment that they like to come and hang out in.”

The Lanes plan to eventually launch the beers commercially and put them on taps and in grocery stores across North Carolina.

Richard Hinnant, who lives in Micro and owns Hinnant Plumbing, met the Lanes at a beer-tasting event. He is doing the plumbing work for their building and comes by the tap room to get a drink — after hours, of course.

Hinnant, who does some of his own home brews, said tasting variations of the Lanes’ beers has been a learning experience. “ It’s very cool to listen to them talk, ‘We’re going to change this,’ and then see the end product,” he said.