No store closings or layoffs are planned at the nation’s largest family-controlled department store, and the buyer, Sycamore Partners, supports the company’s brand and merchandise offerings, CEO Tim Belk said in an interview. The headquarters will remain in Charlotte.

Belk has operated a store in Smithfield for over 75 years, most of that time in downtown but more recently in Centre Pointe Shopping Center on North Bright Leaf Boulevard.

“The Belk that (customers) love is not going to change,” Belk, who will remain as CEO, told the Observer. “We’re going to continue to build on the foundation we’ve put in place.”

A deal for Belk had been expected since April when the company said it was exploring a possible sale, and Sycamore had emerged as the possible buyer last month. The sale would end local control of the 127-year-old retailer that began in Monroe and grew to become one of Charlotte’s iconic companies.
Brian Hamilton, chairman of Sageworks,  called the acquisition a “pretty good deal” for everyone involved.

“Sycamore is getting a solid company, with a proven track record of profitability, positive cash flow from operations, and consistent revenue. Belk is getting what appears to be a fair offer, valuing their company at 20 times their trailing earnings,” said Hamilton, whose firm provides research on private companies.

The deal, which includes the company’s debt, is subject to regulatory approval and is expected to close in the fourth quarter this year, according to a securities filing.

While Tim Belk will remain CEO, his brother, Johnny Belk, said in an interview that he will remain the company’s chief operating officer through the end of January, but will then leave to pursue “other interests.” It is unclear what he will do and who will assume the COO role.

“Belk is exactly the kind of investment we look for: An outstanding brand with a proven success formula and the potential for further growth,” he said.
Sycamore has a portfolio consisting mostly of investments in specialty apparel companies including Aéropostale, Coldwater Creek, Hot Topic, Jones New York, Nine West Holdings and Talbots. The firm, which has more than $3.5 billion in capital under management, says its strategy is to partner with management teams to improve profits and the value of their businesses.

In the deal, Belk shareholders will receive $68 a share in cash for each share of Belk common stock they own, the company said. Although the stock doesn’t trade on major exchanges, Belk’s shares trade over the counter, and the company reports its quarterly results and other financial details like a publicly traded company. 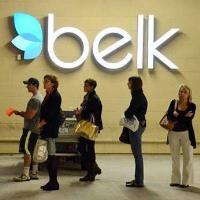