The Ava Gardner Museum will soon unveil an exhibit that includes artifacts and information about Gardner’s friend and costar Omar Sharif, who died this year.

The exhibit will also feature a tribute to husband Frank Sinatra in honor of his 100th birthday and a commemoration of the 25th anniversary of Gardner’s death.

The unveiling of the exhibit is scheduled for 9 a.m. Saturday, Oct. 3. The date coincides with the 15th anniversary of the opening of the Ava Gardner Museum in its current location. The museum, which will serve light refreshments throughout the day, will not hold an Ava Gardner Festival this year.

Sharif, an Egyptian actor, is best known for his roles in the blockbuster classics “Lawrence of Arabia” (1962) and “Doctor Zhivago” (1965). Gardner first starred with Sharif in the 1968 film “Mayerling,” in which she played his mother, the empress of Austria. Almost two decades later, in 1986, she played his wife in “Harem.”

“Harem” was one of the last movies Gardner made before retiring from film making for health reasons.

The new exhibit will include artifacts, photos and information from both films.

Though their marriage did not last very long, Sinatra and Gardner and Ava were lifelong friends. This year would have been his 100th birthday. His son, Frank Sinatra Jr., is touring the country performing his tribute show, “Sinatra Sings Sinatra.” He will be at the Carolina Theatre in Durham on Nov. 18.

The final tribute in the new exhibit will honor Gardner. Since this year marks the 25th anniversary of her death, Gardner will also be receiving a historical marker to be placed near Sunset Memorial Park, the cemetery in Smithfield where she is buried. While the new exhibit will premiere in October, dedication of the marker is slated for sometime in November.

Deanna Brandenberger, the museum’s executive director, said this year is particularly significant in commemorating Gardner’s role in Hollywood history. The three-part exhibit will be a first for the museum, she added.

“The new exhibit’s design will be different from any we have done before,” Brandenberger said. “Our main gallery case will be split into three sections, giving each commemoration their space.

“Sharif once described Ava as one of his dearest friends and that he considered her to be the ‘most beautiful woman in all of the world.’ Omar’s passing was a major loss for the industry and its history, and we wish to highlight his role in Ava’s life as we have done with other friends, such as Lena Horne.

“Ava’s husband and friend, Frank Sinatra, also held a similar view of Ava, and they were a large part of each other’s lives for five decades. The 25th anniversary of Ava’s death is the time for us to draw attention to Ava as the woman and give a eulogy to her personally as well as professionally.” 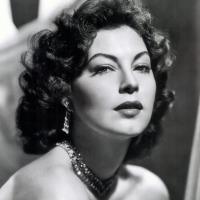