Local dignitaries were on hand Friday for the official unveiling of the Ava Gardner Highway Historical Marker in Smithfield. The marker is located on Highway 70 Business at Sunset Memorial Park, where Gardner was buried in 1990.

The NC Department of Cultural Resources Office of Archives and History approved the marker in June but it took several months for funding and construction.

Ava Gardner has the distinction of being the first and only North Carolina woman to be featured on both Time and Newsweek Magazines covers. In March 2014 she was also on the cover of Our State Magazine.  Over 10,000 people a year visit the Ava Gardner Museum in downtown Smithfield.

The museum’s exhibits showcase her life and career from her humble beginnings as a farmer’s daughter, born in 1922 in the Brogden community, until her death in London in 1990 at the age of 67. She appeared in 67 films from 1941 to 1986.

In September 1951, Gardner appeared on the cover of Time magazine, featured in a story titled “The Farmer’s Daughter,” which also covered the history and importance of the female star in Hollywood. Time, in its piece on Gardner, added some caveats, noting that she was not “the most beautiful babe in Hollywood, nor was she the best actress. However, she exuded an allure and mysterious qualities that sent the glamour meters clicking…she just might be the one new star who could bring glamour back to Hollywood.” By November 1952, Ava would be featured on the cover of Newsweek, not only for her popularity in Hollywood, but she was Mrs. Frank Sinatra and causing a media storm wherever she went.

Ava spent the last 35 years of her life abroad, moving to London in 1968.  Ava retained her American citizenship and visited her family in North Carolina as often as possible, until suffering from a stroke in 1987.

On Jan. 25, 1990, Ava died in her sleep from bronchial pneumonia, an illness she had been battling for several years. Her last words to her housekeeper Carmen Vargas were “I’m tired.” A graveside service was held on Jan. 29, 1990 at Sunset Memorial Park and was attended by over 300 mourners.

At her request, she was buried with a simple footstone and was laid to rest alongside her parents and all but one sibling. 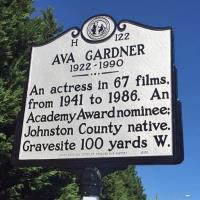