Almost all of the March 2014 issue of Our State is devoted to features about the North Carolina film industry, including a profile on Gardner and features on hometown theaters around the state and Wilmington as “Hollywood East”.

Ava Gardner, a native of Johnston County would appear on hundreds of magazine covers during her career as one of Hollywood’s elite.  She was probably the first and only North Carolina woman to be on both Time and Newsweek Magazines covers.

Now, Ava is honored again as Our State Magazine, has chosen a portrait by Dutch artist Bert Pffeifer which is owned by the Ava Gardner Museum, as the cover of their March issue.  Our State Magazine is North Carolina’s premiere travel and life-style magazine on the state and has frequently featured Johnston County attractions, festivals, and businesses.

It goes without saying that our communities are thrilled the magazine chose Ava Gardner to grace its cover. The article inside features the fashion of Ava and the museum’s exhibits that showcase her life and career from her humble beginnings as a farmer’s daughter in the Brogden community until her death in London in 1990.  This feature will spark new interest in the museum and no doubt bring new and repeat visitors to Smithfield.

In September 1951, Gardner appeared on the cover of Time magazine, featured in a story titled “The Farmer’s Daughter,” which also  covered the history and importance of the female star in Hollywood.  Time, in its piece on Gardner, added some caveats, noting that she was not “the most beautiful babe” in Hollywood, nor was she the best actress.  However, she exuded an allure and mysterious qualities, that sent the glamor meters clicking…she just might be the one new star who could bring glamour back to Hollywood.

By November 1952, Ava would be featured on the cover of Newsweek, not only for her popularity in Hollywood, but she was now Mrs. Frank Sinatra and causing a media storm wherever she went. 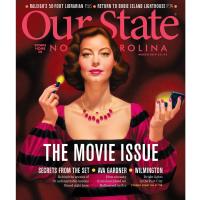