Before the sun had set on the first day on an antique car tour of Johnston County, host Tommy Fitzgerald already had his first good story.

The Sunday night before the week-long tour began, a few of the crew headed to Fitzgerald’s business, Percy Flowers Store near Clayton, to try some of his “almost famous” hot dogs. Along the way, Adam Walkup, who had traveled in from Florida, broke down in his 1911 Locomobile.

Fitzgerald gave Walkup a tow back to the tour’s headquarters at the Holiday Inn Express in Smithfield, and Walkup vowed to find a way to repair his ride. When Fitzgerald got to the parking lot around 7 a.m. Monday, he said, Walkup was making good on that promise.

“He was laying underneath it with a pair of khakis on and a button-down shirt, down there turning wrenches,” he said.

“Does that bring new meaning to the word ‘resilience’ or what?” Fitzgerald said.

That spirit and can-do attitude is common among the members of the N.C. of the Horseless Carriage Club of America, said Fitzgerald, who teamed up with his wife, Donna, to bring the club’s annual tour to Johnston County for the first time.

Donna said they needed that resilience to ride around in cars from the pre-air-conditioning era on Monday, when temperatures reached 95 degrees.

The group cooled off Monday evening in the showroom at Deacon Jones Auto Park, where the dealership served the travelers pizza and canned sodas for dinner. Outside, a couple of dozen people took the opportunity to view about 50 antique cars, which were all built before 1928.

The total number of cars climbed to 75 on Tuesday, Fitzgerald said, and more than half of those were Ford Model Ts.

Sales manager Bruce Richert said he had never seen so many Fords on the Deacon Jones lot, and he confessed his preference for the 1920 Dodge police car on the tour.

“The cars are awesome,” he said. “It’s a great display, and the people are good folks from all over the county.”

Dick Cruickshank of Angier brought a group of three on the tour. They made several stops on Monday, he said, including Atkinson Mill, the Airflow Products Co. plant in Selma and the Barn at Camp Nellie.

“It’s been a good tour so far,” Cruickshank said. “We appreciate getting to stops with air-conditioning so we can cool off.”

Melvin Humphrey drove down from Raleigh to see the display at Deacon Jones. Humphrey got to talking about old cars, and they reminded him of a story from when he was a boy.

Humphrey’s parents had a 1931 Ford Model A, he said, and one day he got mischievous and stuck a neighbor girl’s straw hat on the roof of the car, where she couldn’t reach it.

When the girl threatened to tattle, Humphrey said, he jumped up on the hood to fetch the hat and, he hoped, avoid trouble. Unfortunately, Humphrey did not notice that the windshield was tilted down — which was a feature of early cars to provide ventilation in the summer — and Humphrey split his head on the metal ring around the glass. 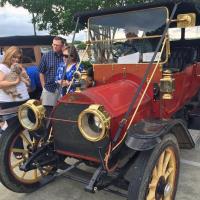