Activate Selma selected as one of Lowe’s 100 Hometowns projects

SELMA, NC: Activate Selma has been selected as one of Lowes 100 Hometowns, a $10 million initiative to celebrate Lowe’s centennial by completing 100 community impact projects across the United States by the end of the year. The nonprofit group’s winning impact project is “Activate Selma: Downtown and Edgebrook Park Community Improvements.” The group and the Town of Selma will be working with Lowe’s in Smithfield. Selma Mayor Cheryl Oliver urged the group to apply for the Lowe’s competition in March. Activate Selma is a grassroots group of residents, volunteers, and business owners who are “revitalizing and uplifting their beloved rail community and all it has to offer.” They meet weekly with the vision statement: “We don’t complain, we take action!” Activate Selma’s application, partnering with the Town of Selma, was one of more than 2,200 submissions Lowe’s received from across the country. As finalists, Cindy Brookshire and Jeffery Hamilton of Activate Selma and Billy Roach, Director of Selma’s Parks &amp; Recreation Department, met with Lowe’s representatives in June to go over the proposed project sites and grant budget. Lowe’s announced Activate Selma’s selection July 21. The Town of Selma and Activate Selma began sharing the news at Activate Selma’s 9 am July 21 meeting at the Selma Lions Club.  Upon learning that Selma had been named a winner, Mayor Oliver thanked Lowe’s for sponsoring a contest aimed at improving 100 communities across America. “What a great way to celebrate Lowe’s 100th Anniversary! I look forward to working with other volunteers to complete our proposed projects. These projects will visually improve Selma, unify us as we work together on a common goal, spark our community spirit, and heighten our sense of pride in our hometown.” Lowe’s 100 Hometowns grant will pay for Activate Selma’s impact project, which includes significant visual upgrades to the downtown streetscape, such as replacing trash cans and adding new planters. At Edgebrook Park, Selma’s only American Disabilities Act (ADA) park, crews will work together to install ADA playground equipment, create a parking area for better access, renovate the picnic shelter and replace the Edgebrook Park sign. All work will be done with Selma volunteers, professional services and Lowe’s employees. Project manager Billy Roach and Activate Selma volunteers will begin meeting with local Lowe’s representatives before July 27. Target date for finishing the project is within the next 100 days. Activate Selma and Town of Selma welcomes individuals or groups – scouts, veterans, church groups – to be a part of this exciting project. To get involved, contact Billy Roach at Broach@selma-nc.com or Activate Selma at activateselma@gmail.com. Other 100 Hometowns
Lowe’s selected 100 projects in 36 states in urban, suburban and rural areas.   Projects include 35 community centers, 19 community spaces, nine shelters, eight housing facilities, seven cultural preservation projects, seven playground installations, six gardens, four food pantries, four skilled trades projects and one civic upgrade, according to Lowe’s. Details are available at Lowe’s 100 Hometowns page on the company website. While Lowe’s stores help make people’s homes better, this centennial celebration project helps makes homes better in the community sense, Marisa Thalberg, Lowe’s executive vice president, chief brand and marketing officer, told the Observer. Deciding which projects to give to came down to their community impact, how many people would be effected, where it was needed and Lowe’s ability to affect that change, Thalberg said. “We also just wanted to have a real representation of the types of submissions we saw,” she said. And project nominations were not about groups or individuals, but people who just want to bring joy to others and make their communities better for everyone, Thalberg said. Including Selma, there are 8 selected projects in North Carolina: ▪ Charlotte: Charlotte Community Park ▪ East Bend: Town Square accessible park  ▪ Elizabeth City: Fowler Alley Community Space  ▪ Hickory: Exodus Methodist Outreach Church ▪ Salisbury: Block Work ▪ Siler City: Chatham County on Aging + Rebuilding Together of the Triangle  ▪ Wilkesboro: Anchor Ridge Kid’s Club  The goal is to have all 100 completed by the end of this year and many before that, Thalberg said. “There’s a lot of repairing needed (since the coronavirus pandemic) and Lowe’s is really proud to be playing a central role in that physically and in an emotional way,” Thalberg said. A little Lowe’s history
Lowe’s has grown from its first North Wilkesboro Hardware store founded by L.S. Lowe in 1921 to more than 2,200 stores in the U.S. and Canada.  Lowe’s became a publicly-traded company in 1961.  Today, Lowe’s serves about 20 million customers a week and has more than 300,000 employees, according to the company.  # # # END # # # https://corporate.lowes.com/newsroom/100-hometowns 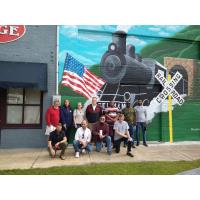